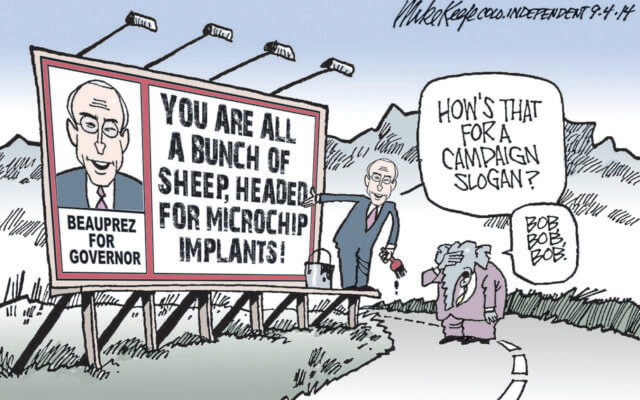 “I woke up this morning feeling like I had a hole in my soul, my American soul,” Beauprez (R-Colorado) said. “It hurts. It hurts deeply.”

Speaking to FOX 31 yesterday, Beauprez said that the vandalism outside the Colorado state capitol affected him so much that he couldn’t even drive by the building for weeks after this summer’s protests over racial justice and police brutality. Here Beauprez commits his first major foul, by even mentioning protests over the killing of Black Americans by police in the same breath as Trump’s fact-free “Wild Protest” to undo the results of a free and fair election that didn’t go Trump’s way. These were not morally equivalent events in any way, and what looks like a coordinated messaging attempt by local Republicans to liken them is just another act of misinformation.

But with Bob Beauprez personally, there’s another problem with hand-wringing over the state of civic discourse in America.

Bob Beauprez is part of the problem.

Bob Beauprez has been on the political scene in Colorado for a long time. In those years he has seen political movements come and go, and himself tried to benefit from the “Tea Party” movement that exploded in response to the election of the nation’s first African-American President. Although Trump has certainly debased the discourse in American politics since he came on the scene in 2015, it was the Tea Party and the factually-disconnected campaign against the Affordable Care Act under President Barack Obama that created the environment in which Trump’s “post truth” politics could flourish.

The video above is from an interview with Beauprez in 2012, in which Beauprez is asked if the U.N. Small Arms Treaty (ratified in 2014 after which the world did not end) would would result in a “modern day civil war for this country.”

BEAUPREZ: Well, some are wondering what will be the, the line that gets crossed eventually, where, where people actually rise up and say enough. I mean, our founding documents refer to it, that people have every right, a free people have every right, that when government becomes too obtrusive, too obsessive, too overwhelming, and infringes on their individual liberty and freedom, free people have the right to overthrow that government and establish a new one.

It’s a phenomenon we’ve witnessed many times now in our sixteen years of covering Colorado politics, where a has-been Republican politico tries to rehabilitate their image by sounding off reasonably about the immoderate turn their party has taken in recent years. In Bob Beauprez’s case, however, this requires pretty much complete ignorance about his record and long, long history of eagerly participating in the Colorado GOP’s slide to the fringe. Susan Greene of the Colorado Independent documented Beauprez’s political devolution ahead of his 2014 gubernatorial loss:

[I]n the eight years since his last bid to govern the state, Beauprez wandered away from the mainstream. Far away. He spent much of his time in private life pushing ultra-conservative causes. He wrote a book calling for a revolution to shift the Republican Party far to the right. And in several interviews over several years, he espoused extremist conspiracy theories, including one that Americans – whom he likened to sheep – eagerly would let the government implant microchips in their bodies.

Make no mistake, folks. There is a desperate need today for a voice of reason in the Republican Party to begin the process of rebuilding whatever the conservative movement in American politics is going to look like after Donald Trump. What’s needed now is honest leadership among political conservatives to admit not just how they were led astray by one man, but by a whole movement built around divorcing their coalition of voters from reality.

Bob Beauprez is not that voice of reason.