“A couple young folks got into the Capitol,” said Rep. Richard Champion (R).

Yesterday’s violent assault on the U.S. Capitol by thousands of supporters of outgoing President Donald Trump has once again completely upended national politics with less the two weeks remaining before Joe Biden is sworn into office. In less than 24 hours, Trump’s much-balleyhooed “Wild Protest” devolved from a final bit of catharsis for the defeated President and his fact-averse diehard supporters into a galvanizing moment of national unity–against Trump, and against the “post-truth” politics that resulted in yesterday’s violence after every rational investigation and court case since the election has found no evidence of election fraud that could affect the result.

As the old saying goes, “victory has a thousand fathers, but defeat is an orphan.” And in the aftermath of unprecedented violence that left four people dead and resulted in the first storming of the U.S. Capitol by hostile forces since the War of 1812, local Republicans who helped incite and even participate in yesterday’s mayhem are hard at work writing an alternative history of these disgraceful events. Yesterday, Colorado Springs Gazette editorial page editor, who was present at the rioting in D.C. yesterday Wayne Laugesen repeated the totally baseless story that “Antifa” protesters had actually broken into the Capitol, not Trump supporters.

Then yesterday evening, a GOP state representative from Colorado who was also on the scene of yesterday’s rioting had this to say to the Littleton Independent:

[Rep. Richard] Champion called the event that culminated in the storming of the House and Senate chambers “very peaceful.”

“It was very well organized and without mayhem or anything else,” Champion said by phone from a hotel room near the Capitol. “Apparently a couple young folks got into the Capitol, which we never saw.”

“I don’t think anyone was in danger,” he said. [Pols emphasis] “There was nothing I saw that warranted that kind of response.” 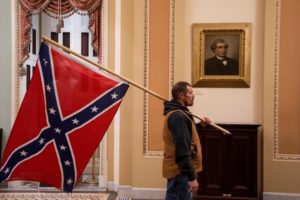 “There was nothing I saw that warranted that kind of response,” said Rep. Champion.

We can only hope these words were spoken before Rep. Richard Champion learned that four people died.

Not to be outdone, Rep. Mark Baisley of Douglas County, who last year made a disgrace of himself after falsely claiming health departments were “altering COVID death certificates,” has decided this must have been Antifa, it just must have! And when you’ve got no credibility to lose, connecting the dots is effortless:

It does not make any sense to me that Trump patriots would storm the US Capitol to interrupt a congressional challenge to the electoral college results. The violent and arrogant actions of this attack (scaling walls, breaking windows) matches the signature of Antifa rioters.

Rep. Baisley might want to have a talk with West Virginia Delegate Derrick Evans, one of the first high-profile Republicans who has been identified from footage inside the building and is facing calls to resign. Or with Nick Fuentes, the anti-Semitic friend of local right-wing columnist Michelle Malkin who also posted incriminating selfies from inside the building like a dumbass.

Yesterday’s disgraceful riot inside and outside the U.S. Capitol could well go down in history as the moment Trumpism died. It makes sense that as this crushing reality begins to dawn on Trump’s diehard supporters, they are going to start rewriting the history of yesterday’s events in order to save face. But the facts are irrefutable: Donald Trump called for these people to come to Washington. Trump sent them to the Capitol. And Trump refused to call the rioters off for hours as they smashed windows and rampaged through congressional offices.

If Republicans meant what they said when they said “enough is enough” after yesterday’s pro-Trump violence inside the U.S. Capitol shook the nation to its foundations, the road back to sanity starts with repudiating Wayne Laugesen, our resident Colorado “House Crazies,” and anyone else who wants to pretend this failed attempt at violent insurrection was not what it plainly was. It is their fellow Republicans who did this. There can be no reconciliation without acknowledging this truth.

Trump, and they themselves, have brought the nation to this precipice we must now all back away from.