Alt-right pundit Michelle Malkin agreed to appear on Craig Silverman’s show Saturday, but became defensive when he asked about her connections to Nick Fuentes and the “Groypers,” a far-right group of white nationalists that includes Holocaust deniers.

The initial topic of the interview was Malkin’s headlining of the July 20 “Back the Blue” pro-police rally in Denver’s Civic Center Park, along with statehouse Republican Leader Patrick Neville of Castle Rock. Event attendees were met by a much larger group of counter-protesters. Despite a substantial police presence, several small fights broke out.

In the days following, both Malkin and Neville gave multiple interviews to conservative media describing the conflict and their “rescue from the mob,” as Malkin put it.

Neville told Fox News host Tucker Carlson that the rally was the most dangerous situation he’d been in since his active combat duty in Iraq. He then described his escape.

Neville: “Myself and Michelle Malkin… we were surrounded by Antifa… eventually we had to evacuate, and had it not been for someone who I’d met moments ushering her into her car, I don’t know if we would have gotten out of there unscathed.” 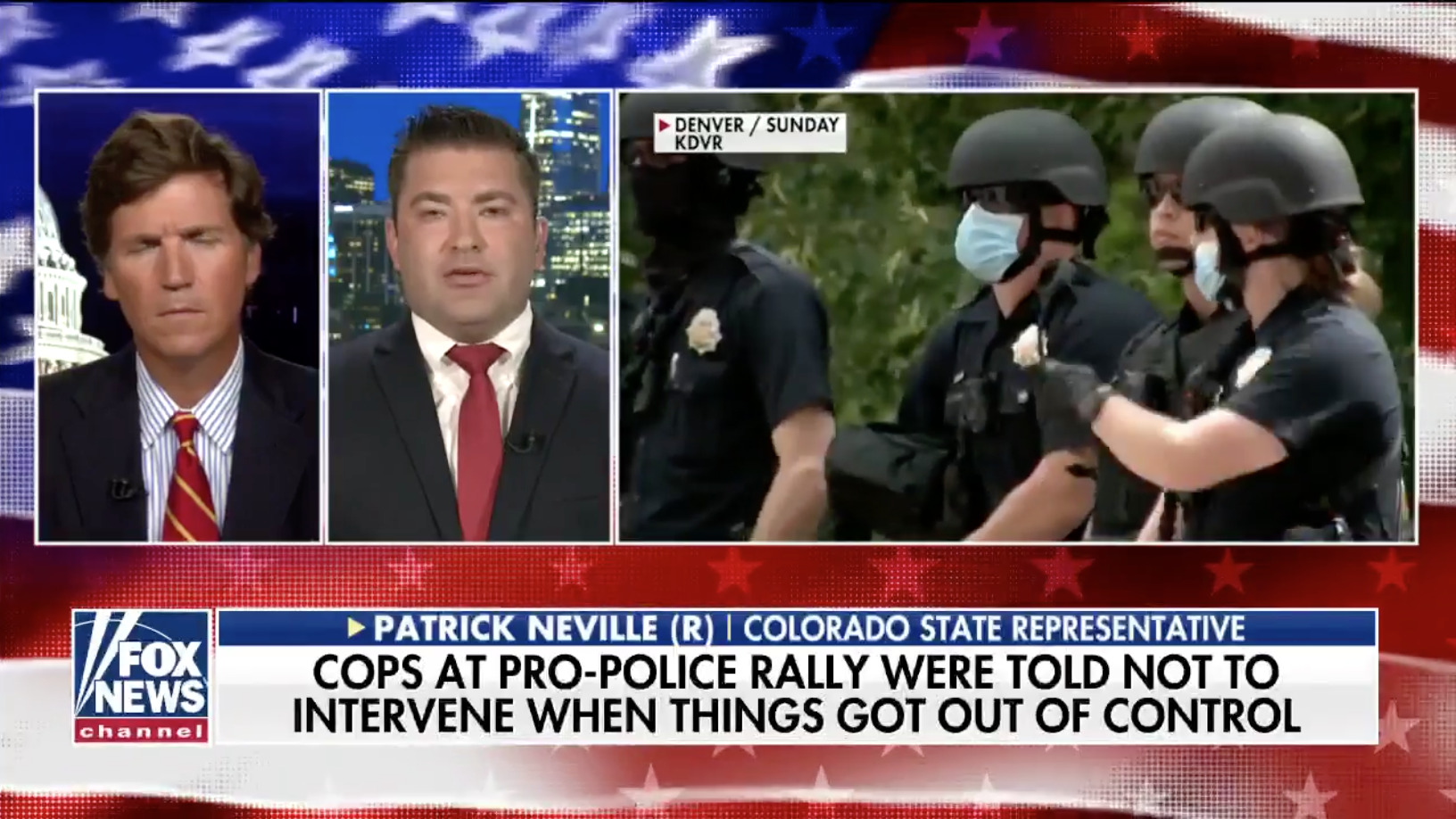 While showing KDVR’s news video of police in riot gear, Carlson asked Neville if the “violence” received any news coverage, Neville responded “no.”

Malkin recounted her version of events to Denver’s Craig Silverman. The former conservative radio host now has a weekly three-hour online podcast, after his previous employers at KNUS literally pulled the plug on him mid-show last November. Silverman says he was dismissed over his criticism of President Trump, a charge KNUS management denies.

Silverman noted that Denver Police Chief Paul Pazen had asked Randy Corporon, the organizer of the event, to consider canceling or rescheduling it in light of the ongoing police reform protests already taking place in the park.

Silverman said he’d been concerned for Malkin and Neville’s safety at the event, and expressed frustration that they were shouted down by counter-protesters and prevented from speaking. He also asserted that as the most prominent speaker with the most extreme positions participating in the event, Malkin was a “lightning rod” for counter-protesters. He then asked her about her vocal support of a man (Nick Fuentes) and a group, the Groypers, who are so publicly racist and anti-Semitic.

Malkin, who has described herself as “Mommy Groyper,” responded by doubling down on her defense of the Groypers. She accused Silverman of lying about them. She then told Silverman she was grateful to a “young Groyper kid and his mom,” for rescuing her and Neville from “the mob” at the rally.

Silverman published his interview with Malkin just one day after she told libertarian radio host Ross Kaminsky she was taking a break from public speaking to put her family first and saying she needed to stay safe for her children.

She argued that militias should replace police officers unwilling to enforce the law. She concluded by comparing the Denver Back the Blue rally to the 2017 Charlotteville’s Unite the Right rally, calling the white nationalist event “misunderstood” and saying police there also has a “stand down” order.

Unlike Silverman, Kaminsky did not question Malkin’s support of white nationalist groups like the Groypers or the organizers of Unite the Right hate rally.

Silverman wasn’t the only conservative commentator to decry Malkin’s far-right views, however. In a Denver Post column last week, longtime Republican consultant Andrew Struttman called on his party to disown Malkin for her support of the “Groyper Army,” which he described as “a collection of young men who adopt an America First ideology along with racism and anti-Semitism.”

“It is morally unconscionable that she has a platform within conservative circles, including speaking at this rally,” Struttman continued, “…conservatives should never stand with someone who adopts the language and views of racists and anti-Semites.”

Malkin did not return a Facebook message requesting comment. This article will be updated with any response received.

Silverman summarized his interview with Malkin on his podcast description:

“The Showstopper today is Michelle Malkin, a veteran conservative pundit, not used to getting questioned by a non-adoring host. No one on Denver Trump radio dares question her about the anti-Jew lowlifes she props up as “Mommy Groyper.” Apparently, the hosts on Denver’s conservative Trump radio don’t mind some Jew-hating associations among their heroes. Wait ’til you hear my hard questions and how Ms. Malkin responded. You’ve rarely heard anything like this.”

Read a transcript of the exchange (full interview here) between Silverman and Malkin over her support of the Groypers below.

Craig Silverman: My God, I hated that about Sunday because you guys had this stage and they tried to drown you out. That’s not productive.

Michelle Malkin: They did drown us out. They pushed out. I didn’t get to say a single word, either did anybody else.

Craig Silverman: OK just to be honest, wasn’t it a Salem-Trump event more than really Back the Blue? Because didn’t the Back the Blue Facebook page say, ‘we want nothing to do with this rally?’ And part of it was, the featured speakers were [Randy] Corporon and Chuck and Julie [Bonniwell] and Steffan Tubbs was going to be there, but the big name is Michelle Malkin. You have a gazillion social media followers, but you’re a lightning rod. And I want to get to it because none of my colleagues with access to a microphone will talk to you about Nick Fuentes and the Groypers. And I watch your Twitter feed and at the end of it, after you’re scared to death in my work ‘hood- I speak to from that neighborhood right now- I was scared for you, but then you start throwing shout-outs to the Groypers. And boy, that pissed me off. Because the Groypers are some Jew-hating sort of people. And I don’t like them, Michelle Malkin. Let’s talk about that.

Michelle Malkin: Yeah. So I knew you were going to get to this. And I’m so grateful to the young Groyper kid and his mom who rescued us from that mob. You know nothing about Groypers, because if you did, you wouldn’t be so flippant in smearing all of them. And the guilt-by-association tactic, I think, is something else that I would think that somebody who fashions themself a First Amendment free speech champion would thoroughly reject.

Michelle Malkin: Ask me anything! You asked me a question and now you’re interrupting me. I have no–

Craig Silverman: I’m sorry. You said that I don’t know anything about the Groypers. I watched Nick Fuentes use his switchblade against Ben Shapiro, confront him […]. He didn’t use the switchblade in person, but the imagery was something else. I had seen the collected work of Nick Fuentes. If you’re telling me that you’re not associated with Nick Fuentes, and that he’s not a leader of the Groypers, and was at that Unite the Right rally in Charlottesville, I’m just asking you, I saw you give a speech on November 14, 2019 at UCLA where you said, “You know what? Those Groypers who disrupted Donald Trump Jr. and Kimberly Guilfoyle, I’m with them. I am with Nick Fuentes. I am with the Groypers. I’m there with VDARE,” and all those people who I worry about being white supremacists and Jew-haters. So I guess the floor is yours.

Michelle Malkin: Okay, well, I mean. Why don’t you finish, because I don’t know.

Craig Silverman: No, I gave you a chance to respond, but I will tell you that I get worked up over anti-Semitism. I would think you would! You’re married to Jesse Malkin and you don’t play around with anti-Semitism here. What about Kirk Widlund the producer at KNUS, where you are a featured speaker, et cetera? Did you see that a Nazi. An apparent neo-Nazi was outed and he had been assigned to be my producer? And can you ask, has there been any discussion in local media about that? Have any of these hosts said word one about a white supremacist in their midst? We need to call this out. And you’re the one who says you get canceled, but where’s my invitation to talk about these things and my fears about anti-Semitism? [pause] Michelle?

Michelle Malkin: Are you done?

Craig Silverman: Well, you told me to go for it. I took your invitation!

Michelle Malkin: Yeah. So anybody can watch any of my speeches. I’m transparent about everything I do, as I have been for the last 30 years. I’m very proud of the speech I gave at AFPAC, the speech I gave at CPAC, the work that I’ve done for America First. You can characterize and lie about the people that I proudly associate with, refuse to disavow. And people who have sort of higher comprehension levels can read all of this stuff for themselves and judge for themselves. I’m proud that VDARE has carried my column for twenty years. I’m very, very proud to stand by them in their lawsuit against Colorado Springs. Again, for people who actually truly believe in free speech, it’s despicable what the city of Colorado Springs did. And I will fight for the rights of freedom of speech, assembly, thought, [and] association, and I do it in a completely transparent manner. So, you know, for you as a white man to call me a supremacist, racist, all this type of stuff– to bring up my husband–which I’m proud to do myself. We’re celebrating 27 years of marriage tomorrow. It’s ridiculous to call me the names that you and your associates have.

Craig Silverman: Not me. I want–I want to talk to you about that.

Michelle Malkin: And that’s all I have to say, because you have a lot of axes to grind about your work situation.

Craig Silverman: No. I want to you to comment on that.

Craig Silverman: I am sad to say. And I —

Michelle Malkin: But you don’t want to try. Goodbye.

Craig Silverman: Goodbye. Good luck to you. You know, I’ve done my research, I’ve done my homework. Wow. Whoo-eee! How is that for a hard landing? I gave you every inch of the interview. I did not edit anything.