Shortly before the U.S. Capitol was overrun by Trump-supporting terrorists on Wednesday, freshman Rep. Lauren “Q*Bert” Boebert was among the first Members of Congress to deliver a speech on the House floor about her objection to counting the electoral votes from the State of Arizona.

You can view the entire speech above, but we’ve also transcribed every word so that there can be no confusion about what Boebert was saying. Boebert’s speech was strange and unsettling at the time, and it is even more concerning when you consider what was happening outside of the U.S. Capitol building at the very moment in which she was speaking. Here is the entirety of Boebert’s objection to the counting of electoral votes from Arizona:

BOEBERT: Thank you, Madam Speaker, and to ease everyone’s nerve, I want you to know that I am not here to challenge anyone to a duel like Alexander Hamilton or Aaron Burr.

Madam Speaker, my primary objection to the counting of the Electoral Votes of the State of Arizona is based on the Constitution and the direction of state legislatures through state law as spelled out in the following two clauses: Article 2, Section 1, Clause 2, states in part — and I quote — each state shall appoint in such manner as the legislature thereof may direct a number of electors, AND, the election clause of the Constitution provides state legislatures with explicit authority to prescribe — and I quote — the times, places, and manners of holding elections. End quote.

For more than three decades, Arizona law, set by the state legislature, has required that voter registration end no later than 29 days before an election [Pols note: Boebert is shouting at this point]. This is clear. It is law. Unless amended by the state legislature, this is the way it needs to be carried out. In Arizona the deadline for voter registration for the 2020 Presidential election was October five, 2020.

Using COVID as a reasoning, Democrats filled a…filed a lawsuit to extend this deadline by 18 days. And an injunction was made by an Obama-appointed judge preventing the Arizona Secretary of State from enforcing the constitutional deadline set by the state legislature.

As a result of this frivolous, partisan lawsuit, 10 extra days were added via judicial fiat to allow voter registration…these 10 days were added after voting had already begun. This is completely indefensible. You cannot change the rules of an election while it is underway and expect the American people to trust it [Pols note: Still shouting]. Now, in this 10 day period, at least 30,000 new voters registered to vote in Arizona. All of these votes are unconstitutional. It does not matter if they voted for President Trump, or if they voted for Vice President Biden. They did not register in time for the election.

We’ll stop here for a moment, because this next section deserves its own highlighting:

The law states October fifth. Either we have laws, or we do not. [Pols emphasis]

Boebert is interrupted here by numerous shouts of “Order, order” from other Members of Congress. Boebert pauses for a moment, then abruptly continues.

Boebert is again drowned out by shouts of “Order, order!” She stops speaking, takes a step back, and looks around in a confused manner. House Speaker Nancy Pelosi uses the gavel and says, “The House will be in order.”

If we allow state election laws as set forth by state legislatures to be ignored and manipulated on the whims of partisan lawsuits…unelected bureaucrats, unlawful procedures, and arbitrary rules, then our Constitutional Republic will cease to exist. The oath that I took this past Sunday to defend and support the Constitution makes it necessary for me to object to this travesty. Otherwise the laws passed by the legislative branch merely become suggestions to be accepted, rejected, or manipulated by those who did not pass them.

Madam Speaker, I have constituents outside this building right now. I promised my voters to BE…THEIR…VOICE. [Pols emphasis] 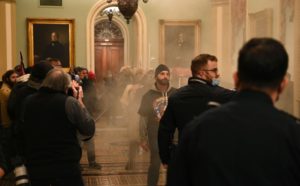 Yikes. Boebert almost could have said that she had constituents who were about to be inside the building.

In this branch of government, in which I now serve, it is my separate but equal obligation to weigh in on this election and object. [Pols emphasis]

We have no idea what this means, either.

Are we not a government of, by, and for the people? They know that this election is not right, and as their representative I am sent here to represent them. I will not allow the people to be ignored. [Pols emphasis]

Madam Speaker, it is my duty under the U.S. Constitution to object to the counting of the Electoral Votes of the State of Arizona. [Pols note: Boebert is basically screaming now] The members who stand here today and accept the results of this concentrated, coordinated, partisan effort by Democrats, where every fraudulent vote cancels out the vote of an honest American, has sided with the extremist left. The United States Congress needs to make an informed decision, and that starts with this objection.

I yield the balance of my time to the gentleman from Florida, Mr. Brian Mast.

This seems like a good time to point out today’s editorial from The Aurora Sentinel calling for the resignation of Boebert and fellow Republican Rep. Doug Lamborn (who also objected to counting electoral votes in several states)