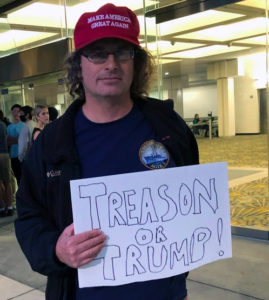 With most of planet Earth outside of Russia, China, and the Republican Party congratulating President-elect Joe Biden on his hard-won victory over Donald Trump in last week’s election, Trump’s refusal to concede and the Republican “dead enders” raging on against hope that some development may yet be uncovered mandating a do-over, or Trump getting another four years anyway, or something similarly insane are increasingly out on a limb.

And to carry that metaphor through, as Politico reports, it had better be a strong limb:

The lack of trust in the election system has led to Republicans being more skeptical about the election results. Although only 18 percent of Republicans had said the results would be unreliable prior to Election Day, now 64 percent feel the same way following Biden’s victory. By contrast, 86 percent of Democrats say they trust the results.

It’s possible and optimists will certainly hope that the results of this Morning Consult poll reflect only a temporary irrational discontent over the outcome of the 2020 elections, much the way any football fan scrutinizes the referees after losing the big game. Unfortunately, years of Trump’s loyal Republican base being steadily weaned off fact-based information sources has created a distressingly large segment of American voters–much larger than believed to exist before last Tuesday–who really do believe and internalize the Trump propaganda that the mainstream media laughs off along with most Americans not in the bubble.

Over the years, we’ve had many occasions in this space to ridicule the far-right fringe that took control of the Republican Party at all levels, beginning with the “Tea Party” and the fateful 2010 elections that gave Republicans the power to stymie Barack Obama’s agenda. When Sarah Palin warned of “death panels” and Bob Beauprez worried aloud that Obama was “pushing the country” toward civil war, we laughed with the assumption that most Coloradans like most Americans were also scoffing at such unhinged babble.

Today, with 70% of Republicans telling pollsters that something for which there is absolutely no evidence of occurring has just occurred, rejecting all of the good faith Americans are supposed to presume for an institution as sacred as our election process, the deep damage done to our nation by the last decade of Republican total political warfare is revealed.

Those responsible have done something terrible to our country, and we can’t say today how to fix it.