We’ve talked a couple of times recently about key promises made on the campaign trail this year by Colorado House candidates–promises that were abandoned by new Speaker of the House Frank McNulty very quickly after last year’s elections.

Since that time, the Denver newspaper reported on differences between Speaker McNulty and Senate Minority Leader Mike Kopp over these issues, in particular the repeal promised by GOP candidates of the FASTER registration fee increases for road and bridge repair. McNulty was also wittily upbraided by former Senate president John Andrews in a column last week.

What we’ve heard is that the anger over McNulty’s abandonment of the FASTER repeal pledge extends well beyond the ideological Andrews or minority firebrand Mike Kopp–a number of incoming House freshmen who made the repeal of FASTER a central campaign theme are reportedly very angry about McNulty’s “surrender” on the issue before the session even began. There was an attempt early on to blame this reversal on the state’s bonding of the revenue over the summer (well before the election), but that’s silly–of course the state was going to monetize the revenue stream once it could be proven. That’s how bridges actually get repaired.

And here’s the twist: was it McNulty himself who told these candidates to run against FASTER?

McNulty is widely credited as the principal strategist of the broader campaign mounted by the GOP and aligned “independent” groups to recapture the Colorado House. What this means is that McNulty was in charge of handling the press on a collective basis on behalf of the slate of candidates and the combined effort, and formulating the message for the millions of dollars in spending on advertising and direct mail.

Like this one, from “Colorado Leadership Fund” on behalf of Rep. Kathleen Conti: 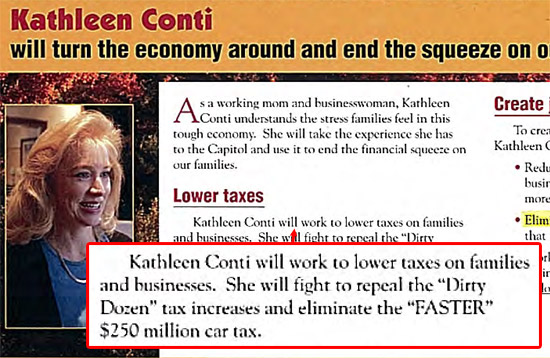 Or this one, from “Citizens for Accountable Government” for Rep. Libby Szabo: 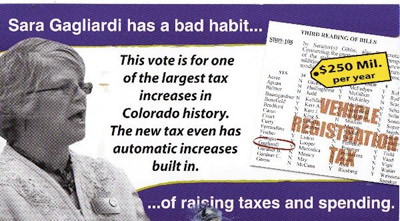 Or this one, for Rep. Robert Ramirez: 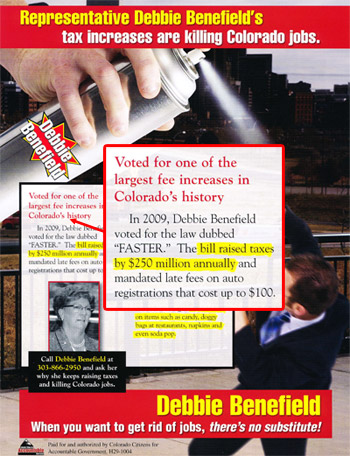 If McNulty was not the one who helped put these candidates out on a limb with FASTER, both through message strategy planning and “independent” spending on their behalf that he may well have personally approved, especially after having taken the credit for that leadership when convenient, he should probably say so.

Above are just a few examples of the independent messaging on behalf of these candidates, who also have their own in-house examples of using FASTER to attack their Democratic opponents. We’ve already talked about the particularly vociferous case of Kathleen Conti, who tirelessly worked opponent Joe Rice’s sponsorship of FASTER  into a treasonable offense on the campaign trail. Conti, like others here, hasn’t yet made a comment about McNulty’s abandonment of the FASTER repeal to the press. But from what we hear, the tension over this “betrayal” is about an inch below the surface, and could turn into a very public problem for McNulty at any time.

After all, they’re the ones who have to reconcile it with their tiny margins of victory.