Get More Smarter on Tuesday (October 13)

If you are a voter in Colorado, you might already have a ballot in your mailbox; check GoVoteColorado.com for more information. Let’s Get More Smarter. If you think we missed something important, please include the link in the comments below (here’s a good example). If you are more of an audio learner, check out The Get More Smarter Podcast. And don’t forget to find us on Facebook and Twitter.

► Just look at the picture that accompanies this New York Times story for a glimpse into the shitshow that is the SCOTUS confirmation hearings in the U.S. Senate. 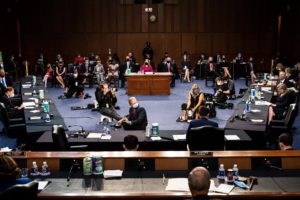 ► As The Washington Post reports, the domestic terrorist group accused in a plot to kidnap Michigan Gov. Gretchen Whitmer apparently also had their sights on Virginia Gov. Ralph Northam:

During the hearing in Grand Rapids, Mich., to discuss the charges filed last week against members of a self-proclaimed militia accused of plotting to kidnap Michigan’s Democratic governor, FBI Special Agent Richard Trask revealed that months ago some of the suspects met in Dublin, Ohio, where Northam, also a Democrat, was discussed as a potential target.

“At this meeting they discussed possible targets, taking a sitting governor, specifically issues with the governors of Michigan and Virginia, based upon the lockdown orders,” Trask told the court, referring to state-mandated restrictions implemented to combat the spread of coronavirus.

► Another new poll shows big leads for Democrats at the top of the ticket in Colorado. Democratic Presidential candidate Joe Biden is up 14 points on President Trump, while Democrat John Hickenlooper holds a 10 point lead over incumbent Sen. Cory Gardner (R-Yuma). These numbers are fairly consistent with polling data that has been released since the June 30 Primary Election in Colorado.

► The fourth and final U.S. Senate debate takes place tonight in Ft. Collins. Scheduled for a 6:00 pm start, tonight’s debate is moderated by 9News’ political duo of Kyle Clark and Marshall Zelinger. The debate is sponsored by 9News, the Fort Collins Coloradoan, Colorado Politics, Rocky Mountain PBS, KRDO in Colorado Springs, KJCT and KKCO in Grand Junction and KOBF in the Four Corners.

It will be interesting to see if Sen. Cory Gardner tries to cut back on a speaking pace that is more auctioneer than real person. Tonight’s debate may also be Gardner’s last chance to attempt to live up to this infamous ad from 2014:

► The Colorado Republican Party appears to be working closely with a “Patriot Muster” group that took part in a violent rally in Denver last weekend.

► There are a number of Colorado Republican candidates who would rather not talk about President Trump.

► Colorado House Minority Leader Patrick Neville announced on Friday that he would not seek another term in GOP leadership — largely because Neville recognizes that his fellow Republicans don’t WANT him in charge of their caucus. On his way out the door, Neville is blaming unnamed Republican “consultants” as the real cause of the GOP’s destruction in Colorado.

► The Senate campaign for Democrat John Hickenlooper is out with a new ad featuring Gov. Jared Polis:

► As CNN reports, the Senate map is looking ominous for Republicans in 2020:

Not only do seats like Colorado and Arizona — both currently held by Republican senators — appear to be all but lost for the GOP in 2020, but seats once considered safe for the party now appear to be slipping into the competitive category because of the decidedly adverse national political environment…

…The story of these final weeks of the 2020 campaign then may not be whether Republicans can hold on to their Senate majority but whether they can avoid a catastrophic seat loss — dragged down by Trump’s collapse at the top of the ticket.

Given that, we need to keep an eye less on people like Cory Gardner (Colorado) and Martha McSally (Arizona), whose respective gooses appears to be already cooked, and more on the likes of Cornyn, Sullivan, Lindsey Graham (South Carolina) and the open Senate seat in Kansas.

As Chris Cillizza of CNN writes separately, South Carolina Sen. Lindsey Graham is clearly panicking about his own re-election hopes.

► Congressman Jason Crow (D-Aurora) is speaking out about continued Republican attempts to destroy the Affordable Care Act rather than make improvements to the health care legislation.

► The Colorado Times Recorder looks at the fallacy of an argument that supporting a National Popular Vote would give Colorado’s votes to California, or something.

► Governor Jared Polis extended a statewide mask ordinance as fears about a second wave of coronavirus infections are beginning to take hold.

As Westword reports, Denver Mayor Michael Hancock is warning that the city is already in the throes of a virus resurgence:

During an October 12 press conference, Mayor Michael Hancock confirmed that COVID-19 numbers that have become more troubling across Colorado are impacting the Mile High City as well. And Denver Public Health & Environment executive director Bob McDonald warned that if those numbers keep getting worse, restrictions that have been loosened in recent months could be tightened again, with a shutdown of all but essential services among the possibilities.

“What could happen is that businesses of all types — gyms, your favorite salon, your favorite restaurant — could all be restricted, and we could all have to stay home,” McDonald said. “Or we could have reduced capacities for a wide range of retailers. To avoid those things, we want to, at the local level, implement more public-health controls to double down on face coverings and physical distancing to the extent we can implement things, so we don’t have those harsh economic impacts.”

Hancock’s tone at the outset was notably somber, as he talked about families challenged by the loss of loved ones and other disruptions in their lives. In an apparent allusion to President Donald Trump, who has downplayed the impact of the disease since contracting it, he stressed that “very few have access to the very best medical treatment in the world to manage the symptoms.”

Denver Public Schools are reconsidering reopening middle and high schools in the midst of a COVID-19 resurgence.

► Colorado will receive some money as part of a settlement with a now-defunct opioid manufacturer.

► Colorado’s air quality is as bad as it has ever been.

► The Denver Post examines how the RTD Board of Directors could look after Election Day.

► Colorado Public Radio looks at how the police reform movement is impacting races for District Attorney in Colorado.

► It would seem that Eric Trump is not at all clear on the meaning of the word “vaccine.” As Chris Cillizza writes for CNN:

Here’s Eric Trump discussing his father’s recovery from Covid-19 during an appearance on ABCs “This Week” on Sunday with host Jonathan Karl (bolding is mine):

Eric Trump: “Yes. Listen, that first day he got hit hard, first day Friday. And I can tell you as son, it’s never fun watching your father fly off to Walter Reed on Marine One, right? I mean, that’s something that — it’s a day that no son wants to, again, remember. It’s — that’s no fun to watch.

“But I’m telling you I spoke to him three times that next Saturday. The guy sounded 100%. It was amazing. It actually probably goes to speak to how good some of these vaccines that are being created are and what my father’s done on the vaccine front, no one could have done. No one could have done.

If, like Eric Trump, you are confused about what a “vaccine” does, then read this.

► SCOTUS nominee Amy Coney Barrett refuses to say whether a President can change the date of an election, which is very weird.

► Don’t miss The Get More Smarter Podcast, featuring an interview with Colorado Attorney General Phil Weiser — who served as a clerk to the late Supreme Court Justice Ruth Bader Ginsburg: