Republicans Tell Economists, Voters to Get Bent on Stimulus

BREAKING: Stocks slide to lows of the day after Trump tweets that he is rejecting the Democrats stimulus proposal and adds: “I have instructed my representatives to stop negotiating until after the election” https://t.co/jn8limUSe7 pic.twitter.com/bdudqRotZm

UPDATE: No relief for you!

🚨 NEWS: Trump sticks a dagger in Covid relief talks. It looks like negotiations are dead until after the election. 🚨 pic.twitter.com/ZGNrLeBOhm 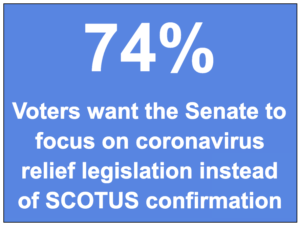 It has been nearly five months since the House of Representatives passed the “HEROES Act” to provide additional relief for Americans still struggling with the economic fallout of the coronavirus pandemic. No further relief has been made available to Americans, however, because Senate Majority Leader Mitch McConnell and his Republican caucus have persistently refused to entertain any sort of compromise on the matter.

We’ve noted before in this space the absurdity of claims from McConnell and other Republicans that it is somehow House Speaker Nancy Pelosi’s fault that the Senate can’t get anything done. It is looking even less likely that the Senate will make any movement on another coronavirus relief package now that a COVID-19 outbreak has sickened at least three GOP Senators. As POLITICO reported on Saturday:

Three Republican senators announced positive coronavirus diagnoses in the past 24 hours, including one, Sen. Ron Johnson of Wisconsin, on Saturday morning. Three more GOP senators have said they are quarantining after potential exposure to the virus, which significantly narrows the GOP 53-member majority.

The Senate had been scheduled to come back to Washington on Monday to begin advancing other judicial nominees, but McConnell has been forced to recalibrate those plans as the pandemic hit his caucus.

While the Senate won’t be back in Washington D.C. for regular business, McConnell and leaders of the Senate Judiciary Committee have promised to plow ahead with the confirmation process for President Trump’s newest Supreme Court nominee, Judge Amy Coney Barrett. But as The Hill newspaper reports, McConnell and friends are doing the exact opposite of what the American people would prefer:

…Eighty-eight percent of Democrats, 77 percent of independents and 55 percent of Republicans were in favor of the Senate passing another stimulus package first.

Meanwhile, Federal Reserve Chairman Jerome Powell is pleading with lawmakers to do something big with another stimulus bill in order to stave off economic disaster. As The New York Times reports:

Powell delivered a message to his fellow policymakers on Tuesday: Faced with a once-in-a-century pandemic that has inflicted economic pain on millions of households, go big.

“Too little support would lead to a weak recovery, creating unnecessary hardship for households and businesses,” Mr. Powell said in remarks prepared for virtual delivery before the National Association for Business Economics.

“Over time, household insolvencies and business bankruptcies would rise, harming the productive capacity of the economy, and holding back wage growth,” he said. “By contrast, the risks of overdoing it seem, for now, to be smaller.”

While the unemployment rate has fallen more rapidly than many economists expected, dropping to 7.9 percent in September, millions of Americans remain unemployed as the coronavirus pandemic keeps many service industries operating below capacity. Consumer spending is holding up, but Mr. Powell underlined — as he has before — that the economy’s resilience owes substantially to strong government support for households and businesses. [Pols emphasis]

If Democrats are able to flip the U.S. Senate in November, there won’t be any confusion about why Republicans lost their majority.