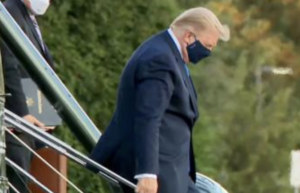 UPDATE: Trump has arrived at Walter Reed Hospital. He was seen boarding (and disembarking) from Marine One.

President Donald Trump, who has Covid-19, is to be taken to Walter Reed National Military Medical Center Friday afternoon in his helicopter as a precautionary measure, the White House said Friday.

The move was recommended by the president’s physician, Press Secretary Kayleigh McEnany said, and he is expected to remain at Walter Reed for several days. He will work from the presidential offices there, McEnany said.

Three people familiar with his condition said earlier Friday Trump has a low-grade fever. The president’s doctor said he was administered an antibody cocktail, along with vitamins, and is fatigued, while Melania Trump has a mild cough and headache.