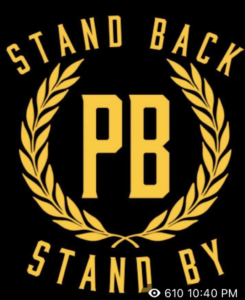 Last night may have been the first time Trump addressed the Proud Boys directly, telling the white nationalist group during the debate to, “Stand back and stand by.”

But after a rally in Colorado Springs in February, the Trump campaign released a two-minute ad that briefly showed a partial, but unmistakable, image of a Proud Boy at the rally, as Trump says in the ad, “And ladies and gentlemen, the best is yet to come.”

Another image in the ad, titled, “Stronger,” can be seen very briefly earlier in the ad.

The images show a yellow jacket worn by about a dozen Proud Boys who attended the event, which drew a total of about 10,000 people both inside and outside the Broadmoor Arena. The jackets state “Proud Boy,” and images and colors match clothes for sale on a Proud Boy website.

Efforts by the Colorado Times Recorder to find out if the image of the Proud Boys was intentionally included in the ad were not successful, but the image itself clearly shows the arms, jacket, and hat of a Proud Boy in attendance.

But it’s a legitimate question given the number of people in attendance and the inclusion of two brief images in the ad.

The ad was reportedly set to air in Denver and CO Springs.

The organization has been designated as a hate group by the Southern Poverty Law Center (SLPC) and members have appeared at events around the country, including at Republican events in Colorado. Numerous Colorado Republicans attended the CO Springs rally.

After Trump’s comments last night, Proud Boys, which has endorsed violence, were celebrating on social media, calling it “historic” and already bringing in “new recruits.”

Trump made the “Stand back and stand by” comment after debate moderator Chris Wallace asked Trump if he was willing to condemn white supremacists.

“Sure, I am willing to do that,” replied Trump. He then said, “Almost everything I see is from the left wing, not from the right wing.”