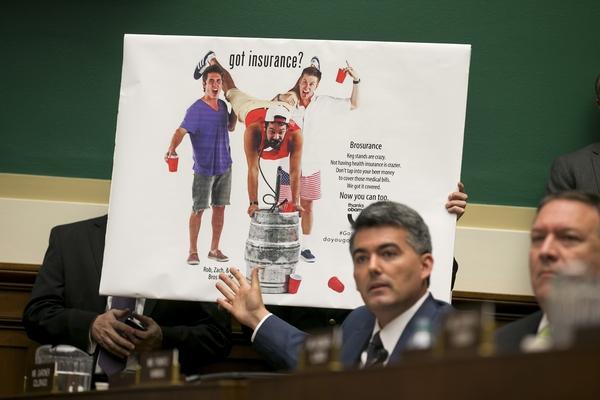 As FOX 31’s Eli Stokols reported in October of 2013, then-Rep. Cory Gardner wasn’t much concerned back then about protecting patients with pre-existing conditions like he claims to be today, or anything else in the Affordable Care Act, which his single-minded purpose in office up to that time and years since has been to repeal.

No, in 2013, Gardner was incensed about a pro-Obamacare ad called “Brosurance.”

During Wednesday’s hearing before the House Energy and Commerce Committee, Gardner held up a large poster board showing the ad itself, which shows three young men engaged in a keg stand under the text, ‘Got Insurance?’

“Do you agree with this kind of advertising?” Gardner asked, gesturing toward the poster board held up by a staffer over his shoulder.

“I can’t see it,” Sebelius responded.

“I did not approve it,” Sebelius answered, talking over Gardner. “This is a state-based marketplace.”

Gardner also referred to the Brosurance campaign as something “that a board member of the Colorado exchange brought forward”, although the ad is actually the work of the Colorado Consumer Health Initiative and Progress Now, two progressive groups that are not associated with Connect for Health Colorado, the state’s exchange.

Now the first problem with this is, as we said at the time, is that the ad in question was in no way under the control of then-HHS Secretary Kathleen Sebelius, being just one of many independent efforts to spread the word about the new coverage options available to Americans under the Affordable Care Act. In this case, the ad didn’t even have any official connection to the Colorado health coverage marketplace it was promoting. And because Sebelius had nothing whatsoever to do with the “Brosurance” ad, Cory Gardner pestering her about it in an official hearing was a colossal waste of everyone’s time.

It’s a moment lost down the memory hole after years of hot air over the Affordable Care Act, which has only gained popularity since its passage despite a ruthless campaign of over-the-top misinformation against it. But it’s an excellent example of how little Republicans like Cory Gardner cared about health care policy during their ultimately failed campaign to repeal the law. Petty grandstands like this faux outrage over “Brosurance,” and misinformation such as Gardner’s false claims of “hundreds of thousands of cancellations” while the ACA drove the rate of uninsured in Colorado to record lows, have been the whole strategy–up until the 117-word bill Gardner introduced this summer to paper over a decade of not caring about people with pre-existing conditions.

In 2020, kegstands for health coverage seem like a small complaint indeed.