Cory Gardner Can Run and He Can Hide 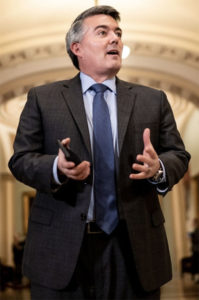 Can’t talk now. I have a phone.

Whoever said, “you can run, but you can’t hide,” has obviously never met Sen. Cory Gardner.

Labor Day has come and gone, and Gardner has made no attempt to distance himself from President Trump. Dropping Trump’s electoral anchor is about the only thing that Gardner hasn’t tried to do in order to win re-election in 2020. We’ve argued that it’s too late for Gardner to even try to dump Trump at this point, and it seems that the Yuma Republican has come to the same conclusion.

To get around this problem, Gardner does what he always does: He runs.

As CNN reports today, can’t-talk-itis seems to be contagious:

As Election Day draws near, Trump’s controversies have grown — and so has the Republican indifference to them. For much of Trump’s presidency, Republicans have rarely pushed back at Trump’s self-inflicted controversies and scandals, knowing that doing so would prompt a Twitter attack from the President and a revolt from his vocal supporters — something that GOP lawmakers, particularly in difficult reelection races, can ill-afford.

And with polls showing Trump commands the support of an overwhelming number of Republican voters, GOP lawmakers are in a bind as they try to court swing voters put off by Trump while avoiding criticizing a President who demands total loyalty from his party.

“In a bind,” you say? Here’s how Gardner navigates such a bind:

The White House this week wasn’t full of controversies, given the historic accords between two Gulf nations and Israel — a move that relieved Republicans and earned Trump bipartisan praise. But such moments have been overshadowed by more than three years of controversies and offensive tweets — and Republicans have grown weary of answering questions about them. 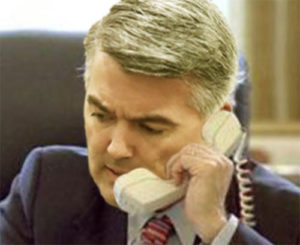 This way I don’t have to listen to the dial tone.

Many in difficult reelection races avoid answering questions from reporters, taking back staircases and entrances to avoid areas where the press congregates.

Sen. Cory Gardner, who faces a tough reelection bid in Colorado, was spotted on the phone four times between Tuesday and Wednesday as he entered and exited the Senate through a back staircase, declining to answer questions.

Asked if he could stop and take questions as he left the Capitol after the final vote Tuesday, Gardner said no: “I’m on the phone,” he responded as he headed to a car that pulled up the moment he walked out, a move that kept reporters from approaching him. A spokesperson didn’t respond to a request for comment. [Pols emphasis]

This leads us back, as it always does, to that infamous commercial from Gardner’s 2014 U.S. Senate campaign:

And when I’m pretending to be on the phone, don’t talk to me.