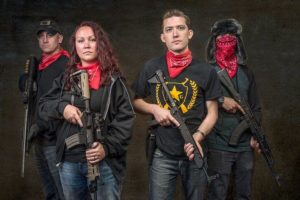 Colorado Public Radio’s Dan Boyce reports on the arrest late last week of several described-as “Antifa” protesters, who participated in an armed protest in early August outside the home of one of the Colorado Springs police officers involved in the killing of De’Von Bailey:

“What may have begun as a peaceful protest quickly escalated into riotous and illegal behavior,” according to a statement sent out by Colorado Springs police.

Both Sherrie Smith, a 36-year-old resident of Fountain, Colo., and 33-year-old Lloyd Porche of Denver were charged with multiple felonies connected to carrying and allegedly threatening people with assault-style rifles. Charles Johnson, a 20-year-old Colorado Springs resident, has been charged with attempted robbery of a cell phone. Officials have charged all three with inciting or engaging in a riot and other misdemeanors.

On Aug. 3, scores of protesters, many with signs supporting the Black Lives Matter movement, marched to the home of CSPD Sgt. Alan Van’t Land, one of the officers who shot Bailey. Van’t Land’s property was roped off with signs that said “no trespassing,” and the officer did not appear to be home at the time of the protest.

As readers know very well after a summer of tense protests across the state and nation, it’s legal in most places in Colorado outside the City and County of Denver to openly carry firearms. It is not legal, however, to point those weapons at any other person or property, or to intimidate someone with a weapon into believing their life is at risk. Allegedly that is what happened in the Pulpit Rock neighborhood of north Colorado Springs on August 3rd, specifically that “Antifa activist” Sherrie Smith pointed her rifle at an occupied vehicle. One other person was similarly charged with felony menacing, and a third man was charged with trying to snatch someone’s cell phone. All three face rioting charges, which CSPD in their release identify as felonies while Colorado Public Radio calls them misdemeanors in the story above.

Back in 2017, we took note of a Colorado Springs Independent story profiling “Redneck Revolt” members in Colorado Springs, including an interview with the same Sherrie Smith who was arrested Thursday. In that story, Smith explained that her group doesn’t adopt the same tactics as “Antifa,” and that she isn’t “not looking for confrontation like they are.” Based on events, between 2017 and last month Smith’s view on confrontation evolved–but there’s still a lot we don’t know about what specifically transpired. With that said, our comments in 2017 appear to have been borne out by these 2020 events:

If you agree that heavily armed right-wing protesters are not what you’d call an indicator of healthy political discourse, we’d say that logical consistency in this regard is called for on the left as well. The argument that protesters against the far right and racist groups require armed protection beyond what the police provides, as tempting as that may be after incidents like Charlottesville, only makes violent confrontation more likely.

This is where we might otherwise be prepared to end–but unfortunately, despite the possibility that charges were entirely earned by the alleged perpetrators in this case, we can’t ignore so many other cases over the summer where violence against lefty activists was either outright ignored or questionably investigated by police. CSPD officers responding to a protest outside the home of a fellow CSPD officer showed a…punctiliousness for strict enforcement we didn’t see in Teller County a month before.

Either way, this incident reaffirms the rule: when guns are not present, they’re not a problem. It’s our hope that all misconduct involving guns is treated by law enforcement the same way, no matter the politics of the individual holding the gun.