Teller County MAGA Attack: Is Colorado Okay With This? 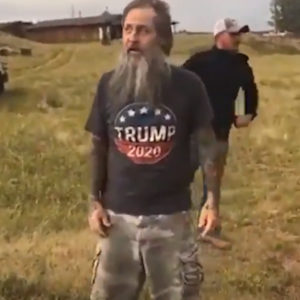 We wrote just over two weeks ago about a video clip we were forwarded (above) of an apparent attack by right-wing “counter-protesters” in Teller County on a “car caravan” protest against the county’s controversial agreement with federal immigration authorities to house immigration detainees in their relatively remote county jail. The video you can see above clearly shows numerous individuals charging down the hillside and assaulting the passengers of a minivan stopped at an intersection. And this is where it gets troubling: the right-wing protesters were apparently tipped off to the incoming protest caravan by Teller County Sheriff Jason Mikesell personally, and local law enforcement can be seen mingling with the “counter-protesters” immediately before the attack in photos provided by the group Abolish ICE Denver.

Since that time, there’s been almost no news coverage of this incident, despite a belated promise by Teller County to investigate after the clip of violent video of the attack became public. That is until yesterday, when the Colorado Springs Independent’s Heidi Beedle wrote her feature-length story explaining the controversy over Teller County’s holding of federal immigration detainees, and reporting on the attack on Abolish ICE protesters in greater detail than any other media outlet has:

When the Abolish ICE protesters arrived in Woodland Park, they did not receive a warm reception. “We noticed there were trucks circling and people watching us that were not associated with our group,” says Christina. “We were instantly on high alert. At that point we decided to proceed, but with caution. I had gotten notification there were counter-protesters waiting for us. I knew that the more vulnerable people were already going to go, so at that point I felt like it would be necessary to have more white people going.”

…Finding the roads blocked, the protest caravan of almost a dozen vehicles stopped on Hybrook Road, next to the counter-protesters. “I was livestreaming because I was alone in the car, and I was one of the cars that got attacked in Aurora at the Tollgate Crossing protest,” says Christina, “so I was already on high alert and had my camera going.

“When I first arrived, the counter-protesters had a Confederate flag and a blue lives matter flag and they were yelling profanities and flipping us off,” she says. “In particular they were flipping off the Black Lives Matter protesters in front of me, who had branded their car with BLM logos and were engaging with them verbally.

“At that point, that was when the guy who had been flipping them off and yelling at them sort of led the charge of the mob. They all kind of came behind him to back him up. Suddenly I noticed the counter-protesters racing down the hill across from the car and pulling someone out of the car in front of me. So I put my car in park, tugged my mask up over my face, and kept filming. I ran up out of the car to try to break up the fight, and it was clear to me that the counter-protesters were the aggressors and they came running up on a group of people in the car.”

Although Teller County Sheriff deputies were all over the area and without a doubt witnessed the entire attack, no one was arrested–and all these weeks later, we have heard nothing to suggest anyone will be. It’s not just the attack on the protest caravan that warrants further investigation in this case. The open encouragement of the “counter-protest” by Teller County Sheriff Mikesell combines with the failure to take any action against the clear aggressors to make the whole business look very, very bad.

Our recommendation to stay out of Teller County, until we can say with confidence that your bumper sticker won’t get you attacked by the roadside while the sheriff looks on with a smile like Bull Connor, stands.