Armed Left-Wing Protesters? Thanks, But No Thanks

UPDATE: Colorado Springs CAN wants to clarify some details about the CS Indy’s report:

COS CAN is not directly affiliated with Redneck Revolt. Sherrie Smith is an organizer for COS CAN and is a member of Redneck Revolt, but the two organizations are entirely separate entities. We do not dictate which organizations or groups our members or organizers may belong to. COS CAN is an Indivisible group committed to interacting with and advocating to our elected officials.

COS CAN supports Redneck Revolt’s constitutionally protected right to bear arms and their right under Colorado statute to open carry. We do not believe legally carrying or possessing a gun to be an inherently violent act. [Pols emphasis]

As evidenced by the events in Charlottesville and the threats that have been received by multiple members of our organization, there are people who wish to do harm to those in the activist community. We appreciate the actions of organizations like Redneck Revolt who are willing to put themselves between peaceful protesters and those who would seek to do us harm.

Everyone is welcome to resist in the way that they feel comfortable. We do not dictate to other organizations what their rights or values should be.

And there you have it, folks. Please, be safe. Original post follows. 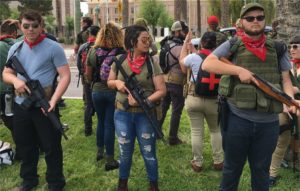 The Colorado Independent’s Nat Stein has a fascinating story up today about local liberals who are adopting a hotly controversial tactic often seen from the far right: showing up to public protest events openly carrying firearms.

The Smiths, Lawyer and most of the other shooters at this session at Whistling Pines Gun Club are members of the Colorado Springs chapter of the Colorado Action Network that goes by the more manageable acronym, COS CAN. It’s a group styled after the Indivisible project, which acts as a guide to resisting the Republican agenda by mobilizing a nationwide network of progressives to dog their elected representatives. Indivisible was itself modeled after the obstructionist successes of the Tea Party when Democrats held a supermajority in Congress during former President Barack Obama’s first term.

Several Indivisible-inspired groups sprung up organically right after the election, but COS CAN has persisted as one of the most tight-knit and committed. The group of mostly women and their more understated husbands gets together regularly to call their congressional delegation, stage sit-ins at their offices and attend protests against whatever has sparked liberal outrage that particular week. And now, in true Colorado Springs fashion, some of them have added regular shooting practice and open-carrying at rallies to their tactical repertoire.

Predictably, the presence of guns has intensified the ongoing debate about safety and violence in the political climate. Locally, activists are torn and trying to figure out whether their tenuous cohesion can withstand such fundamental differences of opinion. Nothing is settled, other than the guns are here to stay. Because this group of gun-toting leftists, a chapter of the aptly named national movement Redneck Revolt, isn’t here to have a debate…

Generally speaking, we ourselves are not inclined to have “debates” with people who are at that moment carrying big-ass guns, because it seems to us you never really know how that’s going to end. In Colorado, “open carry” is legal for anyone legally allowed to possess a firearm pretty much everywhere except for within the City and County of Denver.

That means you’ll never see the “Redneck Revolt” on patrol at the State Capitol. Colorado Springs, on the other hand, is (pardon us) open season. But does that make it a good idea?

Open-carry protests have become a fixture of the far right in recent years in the many states like Colorado where the practice is legal, and in most cases they have been condemned on simple public safety grounds without the need to make ideological judgments about their purpose. The strong relationship between armed protests and the extremist right wing, in particular white separatist and white supremacist groups, only further stigmatizes open carriers protesting and not.

If you agree that heavily armed right-wing protesters are not what you’d call an indicator of healthy political discourse, we’d say that logical consistency in this regard is called for on the left as well. The argument that protesters against the far right and racist groups require armed protection beyond what the police provides, as tempting as that may be after incidents like Charlottesville, only makes violent confrontation more likely. And it feeds into right-wing tropes in favor of everyone packing heat that progressives just shouldn’t subsidize.

Readers might disagree with us, and that’s why we have a comment section. But for us, all of this is trending in a direction we would prefer America to, you know, avoid.