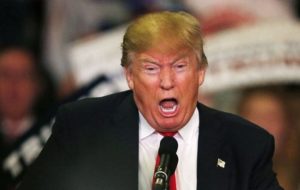 As the Denver Post’s David Migoya reports, Colorado Secretary of State Jena Griswold responded with emphasis to last week’s suggestion by President Donald Trump that voters in North Carolina cast both mail and in-person ballots, meaning vote twice, which is in case you didn’t already know this is a crime everywhere including in Colorado:

Colorado Secretary of State Jena Griswold said Monday she would consider referring President Donald Trump for prosecution in cases where double-voting is suspected in the state.

In the latest salvo against Trump and his call for voters to test the integrity of election systems by casting both mail-in and in-person ballots, Griswold tweeted that her office is serious about combating voter fraud…

“It’s important to underline to the president and the U.S. attorney general and anyone who is confused that it’s illegal to double vote,” Griswold told The Denver Post in an interview Monday. “We have safeguards in place, including signature verification, laws on ballot collection, and checking the participation in other states. If the president is causing people to vote twice, he could be partially to blame and we’ll explore the options if it happens.”

As we all learned again exhaustively during the impeachment proceedings, a sitting President can’t be criminally prosecuted, but assuming Trump becomes a private citizen in January it’s certainly possible that Trump could find himself criminally liable for this and any number of other misdeeds–as Rep. Ken Buck sussed out himself in questioning special prosecutor Robert Mueller. It’s fair to note that objectively speaking, encouraging voters to commit election fraud could find itself down the list of prosecutable offenses.

Republicans like Sen. Cory Gardner commonly downplay Trump’s rhetorical outrages by claiming it doesn’t matter, and Trump “blowing off steam” doesn’t do any real-world harm. This becomes a more difficult pretense to maintain when the President instructs his supporters in detail to commit felonies, and reminds us as he did after he told “his people” to “slow the testing down” that he never makes jokes.

Here’s another fair warning: don’t try it, at least not on Jena Griswold’s watch.