Get More Smarter on Wednesday (September 2)

Today is the official anniversary of the formal end of World War II. Let’s Get More Smarter. If you think we missed something important, please include the link in the comments below (here’s a good example). If you are more of an audio learner, check out The Get More Smarter Podcast. And don’t forget to find us on Facebook and Twitter.

► As The Colorado Sun reports, Colorado Sen. Cory Gardner still very much wants to get rid of Obamacare…but that’s about the extent of his health care plan. Gardner and other Republicans are finding that ACA opposition is not very popular with voters.

► In case you missed it, this happened on Tuesday:

So the president is denying something that no one has actually reported – that he had a series of mini-strokes. https://t.co/GcatJopYV9

As we noted yesterday, the White House is facing increased pressure to explain why the President really made an unscheduled visit to Walter Reed Hospital last November.

The sum would shatter past monthly records as small donors have poured money into Mr. Biden’s coffers, especially since the selection of Senator Kamala Harris as his running mate, and big contributors, from Silicon Valley to Wall Street, have given checks that can be as large as $721,300.

In a sign of the financial momentum behind Democrats, ActBlue, the main site that processes donations to the party, reported the second-biggest fund-raising day in its history on Monday, with more than $35 million donated. A majority of Mr. Biden’s August total came from online grass-roots donors, according to another person familiar with the figures.

The people familiar with Mr. Biden’s fund-raising did not know the exact final figure for the month of August, or how much higher than $300 million it would be.

Barack Obama’s 2008 campaign holds the current record for fundraising in one month at $193 million. Biden will OBLITERATE that number.

► Senate Republicans and President Trump’s campaign have announced new ad buys in several states…none of them in Colorado. In other words, it sucks to be Cory Gardner.

► If you know anyone who attended the “Covid Chaos” event at Bandimere Speedway in Jefferson County on Tuesday, you should probably not go anywhere near them for the next 14 days. 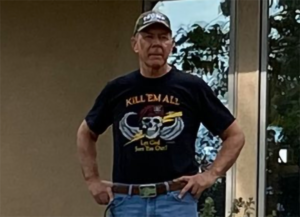 The guy wearing a “Kill ’em all, let God sort them out” t-shirt says school teachers are wussies for being worried about COVID-19.

► Congressman Ken Buck (R-Greeley), who moonlights as the State Republican Party Chairman (or vice versa) has a new Op-Ed in Newsweek the criticizes public school teachers for being worried about COVID-19.

Teachers’ unions across the country have a message for every American. Teachers are afraid—too afraid to go back to school. The unions have worked overtime to drive home one theme: In-person instruction will lead to teachers’ deaths. Never mind that the scientific studies and experiences of most countries around the globe tell us something entirely different…

…While children in France, Germany and most European countries, in fact, are returning to their classroom setting for education, the unions representing teachers in the United States want to use the school shutdowns as an opportunity to usher in radical political change in the nation. In order to do so, they insist that teachers are risking their lives if they return to schools.

► There will not be another Senator Kennedy from Massachusetts in 2021. The New York Times reports on Tuesday’s big primary battle:

Forging a coalition of younger and more liberal Democrats, the sort of voters who once formed the core of the Kennedy base, Mr. Markey was winning about 54 percent of the vote when Mr. Kennedy called him to concede.

By winning renomination in a generational clash — and the marquee Democratic Senate primary of the year — Mr. Markey, 74, proved that the ascendant left is not eager to simply throw out long-serving incumbents in favor of younger rivals, such as the 39-year-old Mr. Kennedy. Mr. Markey, who was first elected to Congress in 1976, was able to outflank Mr. Kennedy with progressives, leaving the heir of Massachusetts’s most storied political dynasty little opening.

► For someone who likes to say that she really doesn’t believe in QAnon, Republican congressional candidate Lauren “Q*Bert” Boebert spends a LOT of time talking about QAnon conspiracy theories.

► Data from three new polls suggests that last week’s Republican National Convention went over about as well as a rerun of Full House. As Greg Sargent explains for The Washington Post:

All that is consistent with current polling averages putting Biden up by just over seven points. Trump might have gotten a slight bounce. But if he is down by that much at what should be a high point — and remember, explosive scenes from Wisconsin have been dominating the news — that’s a tough place to be.

► The Trump administration proposed a new rule this week that will make it much easier for oil and gas companies to drill on public lands and national forests in Colorado.

► As The Grand Junction Daily Sentinel reports, BLM officials may have been less than truthful in discussing the cost benefits for moving the agency’s headquarters to Grand Junction.

► If you’re still thinking about driving somewhere this Labor Day, please allow us to make a suggestion: DO NOT go to Iowa.

► As NBC News reports, another half-baked coronavirus treatment idea has bit the dust:

There is no solid evidence for or against recommending convalescent plasma to treat patients hospitalized with COVID-19, a government panel said Tuesday, less than 10 days after the Food and Drug Administration authorized emergency use of the treatment.

The COVID-19 Treatment Guidelines Panel, part of the National Institutes of Health, said it had reviewed all of the available research on convalescent plasma, including the FDA’s analysis that led to its emergency use authorization.

“There are currently no data from well-controlled, adequately powered randomized clinical trials that demonstrate the efficacy and safety of convalescent plasma for the treatment of COVID-19,” the group wrote online.

► Democrat John Hickenlooper is out with a new ad blasting Sen. Cory Gardner for leaving Washington D.C. without taking any action on new coronavirus relief legislation:

► As The Washington Post reports, the hottest Presidential battleground appears to be in the Midwest:

Last week’s Republican convention had just concluded when Joe Biden’s top strategists began hearing from worried Democrats. They told the officials that President Trump’s singular focus on a “law and order” message, coupled with images of violence in cities, threatened Biden’s standing, particularly among White voters in the industrial Midwest.

Over the past few days, Biden has offered his response, reorienting his campaign. He delivered a forceful anti-Trump speech in Pittsburgh, afterward bringing pizza to a firehouse. He began giving newfound attention to Minnesota, a state Democrats haven’t lost in nearly 50 years, and his campaign is eyeing potential trips to Wisconsin and Michigan.

Biden also began running ads in places like Michigan, Pennsylvania and Wisconsin — three states that secured the presidency for Trump in 2016 — that show empty football stadiums and text that reads, “Trump put America on the sidelines. Let’s get back in the game.”

► A new surprise order from the Centers for Disease Control is halting evictions nationwide through the end of 2020.

► Come on, Hinsdale County! Get your shit together! 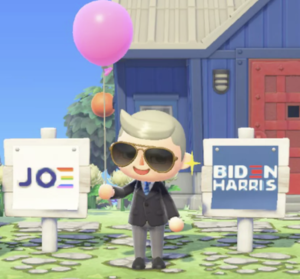 The Biden-Harris campaign released four sign designs for players to download, featuring the official Biden-Harris logo, Team Joe logo, the “Joe” Pride logo, and an image of aviator sunglasses shaded in red, white, and blue. Players will be able to access the designs in-game by scanning the design QR codes through the Nintendo Switch Online app…

…In-game concerts and events have proven to be extremely popular with players throughout the pandemic. Travis Scott held his first concert in Fortnite in April, and over 10 million players attended it. Other popular artists like Idles and Cherry Glazerr have played virtual festivals in games like Minecraft.

Millions of people have picked up Animal Crossing: New Horizons since its initial release in March, and the Biden campaign is hoping to engage that large base with their new merch.

Whether or not you support Biden’s campaign, you have to admit that this is pretty freakin’ ingenious.

Antifa, which is short for anti-fascist, is not an actual group that has an address or membership to subpoena. That fatal flaw in Paul’s reasoning was on full display as “Antifa HQ” trended on Twitter, though many users also reminded Paul that America’s Greatest Generation is renowned for beating the fascists in World War II.

Antifa is more of a shared belief than an organization. Subpoenaing Antifa would be sort of like trying to subpoena the Easter Bunny.

► If you spend enough time blindly following President Trump, eventually you start to talk like him.

► President Trump says “They’re all going to die.” Nobody is sure what he’s talking about.

► If not for Sen. Cory Gardner, the CARES Act would have only passed by a vote of 95-1.