Get More Smarter on Tuesday (August 18)

The Denver Nuggets have a 1-0 series lead over the Utah Jazz in the first round of the NBA playoffs. Let’s Get More Smarter. If you think we missed something important, please include the link in the comments below (here’s a good example). If you are more of an audio learner, check out The Get More Smarter Podcast. And don’t forget to find us on Facebook and Twitter.

► There’s big news today on the story of Russian interference in the 2016 election. As The New York Times reports:

A sprawling report released Tuesday by a Republican-controlled Senate panel that spent three years investigating Russia’s 2016 election interference laid out an extensive web of contacts between Trump campaign advisers and Russian government officials and other Russians, including some with ties to the country’s intelligence services.

The report by the Senate Intelligence Committee, totaling nearly 1,000 pages, provided a bipartisan Senate imprimatur for an extraordinary set of facts: The Russian government undertook an extensive campaign to try to sabotage the 2016 American election to help Mr. Trump become president, and some members of Mr. Trump’s circle of advisers were open to the help from an American adversary…

…the report showed extensive evidence of contacts between Trump campaign advisers and people tied to the Kremlin — including a longstanding associate of the onetime Trump campaign chairman Paul Manafort, Konstantin V. Kilimnik, whom the report identifies as a “Russian intelligence officer.”

The Senate report for the first time identified Mr. Kilimnik as an intelligence officer. Mr. Mueller’s report had labeled him as someone with ties to Russian intelligence.

This report from the Senate Intelligence Committee — which is CONTROLLED BY REPUBLICANS — pretty well blows up President Trump’s claims of a “witch hunt.” Mike Littwin of The Colorado Sun calls the report “maybe the most shocking moment from the U.S. Senate since John McCain’s thumbs-down vote on ending Obamacare.” The Huffington Post zeroes in on the finding that former Trump campaign manager Paul Manafort was deemed a “grave” security threat.

► Postmaster Louis DeJoy is scheduled to testify at a Senate Homeland Security and Governmental Affairs Committee hearing on Friday about funding requirements for the postal service to handle mail ballots this fall. As POLITICO reports, DeJoy is already bending to widespread criticism:

Postmaster General Louis DeJoy announced Tuesday that he was suspending “longstanding operational initiatives” at the United States Postal Service, amid fears that the changes could delay election mail this fall in the middle of the pandemic.

“To avoid even the appearance of any impact on election mail, I am suspending these initiatives until after the election is concluded,” DeJoy said in a statement.

Meanwhile, as The Washington Post reports, state governments aren’t waiting for the feds to take action:

At least 20 states plan to file lawsuits this week against the U.S. Postal Service and its new postmaster, Louis DeJoy, seeking to reverse service changes that have prompted widespread reports of delays and accusations of an intentional effort to thwart voters from mailing their ballots this fall.

The suits, expected to be filed in federal court imminently, will argue that the Postal Service broke the law by making operational changes without first seeking approval from the Postal Regulatory Commission. They will also argue that the changes will impede states’ ability to run free and fair elections, officials from several state attorney general offices told The Washington Post. The Constitution gives states and Congress, not the executive branch, the power to regulate elections.

“We’re trying to stop Trump’s attacks on the Postal Service, which we believe to be an attack on the integrity of election. It’s a straight-up attack on democracy,” Maryland Attorney General Brian Frosh (D) said in an interview. “This conduct is illegal. It’s unconstitutional. It’s harmful to the country. It’s harmful to individuals.”

“We’re asking a court to make him stop,” he said.

Colorado is among the states filing lawsuits.

► Democratic U.S. Senate candidate John Hickenlooper is going after Sen. Cory Gardner (R-Yuma) for his silence on efforts by President Trump to defund the U.S. Postal Service as a means of suppressing votes in the 2020 election. As The New York Times reports:

But Democrats running for the Senate in states that rely heavily on the mail made clear they would continue to press the issue. John Hickenlooper, the former Democratic governor of Colorado, took to Twitter in a campaign video to upbraid the impact of the delays and laid the blame squarely on Mr. Trump and his Republican opponent, the incumbent Cory Gardner.

“It just makes me want to pull my hair out, and Cory Gardner hasn’t said a word,” Mr. Hickenlooper said. [Pols emphasis]

Gardner has said some words about the postal service — quite a few of them, actually — but he has yet to offer a coherent public comment about the issue.

► Day One of the Democratic National Convention is in the books. POLITICO is tracking all of the DNC news, including Monday’s big speech from Michelle Obama. As The Washington Post notes, this speech from the former First Lady is not one that Melania Trump is going to want to borrow. Check out CNN for more analysis on the highlights and lowlights from Monday.

President Trump denigrated Michelle Obama on Tuesday — at an event celebrating 100 years of women’s suffrage, no less — because he is sad that Obama said that Trump was “in over his head.”

Why is a candidate for Congress in Colorado talking about Tom Hanks and Greece? Boebert has expressed support for the QAnon conspiracy theory. QAnon followers have suggested Tom Hanks is a pedophile sex trafficker seeking sanctuary in Greece. https://t.co/wKXK9h1rw2

► President Trump is trailing in the polls as he tries to get elected to a second term in the White House, but that isn’t stopping him from advocating for a THIRD term. As Chris Cillizza explains for CNN:

“We are going to win four more years,” Trump said at a rally in Oshkosh, Wisconsin on Monday. “And then after that, we’ll go for another four years because they spied on my campaign. We should get a redo of four years.”

Of course, what Trump is proposing is banned by the Constitution, which limits presidents to serving two terms. (If Trump lost in 2020, he could, theoretically, run again in 2024). There is no “redo” provision in the Constitution for extraneous circumstances surrounding a president’s first term. And even if there was, Trump’s allegation that he deserves a third term because “they spied on my campaign” wouldn’t pass any sort of smell test…

…While I hesitate to suggest there’s any real strategy behind Trump’s proclamation — being a troll isn’t a strategy — I do think that he is absolutely obsessed with his own legacy and what will happen to Trumpism when he leaves office (whether voluntarily or involuntarily).

► The Denver Post updates the status of several major wildfires burning in Colorado.

► As The Colorado Sun reports, Sen. Cory Gardner (R-Yuma)continues to dodge questions about the U.S. Senate’s inability to come up with a new coronavirus stimulus plan:

[Gardner has] declined to address who is to blame for the stalled negotiations and instead said that everyone just needs to do better. “I’m not going to point fingers,” he said in an interview last week. “There’s too many people who want to point fingers, and maybe that’s the fault of everyone.” [Pols emphasis]

Colorado U.S. Sen. Michael Bennet said the blame belongs to Republican leader Mitch McConnell for not acting sooner. Bennet joined other Democratic leaders at an event Monday in Denver to tout the state’s model for all-mail voting and support the Postal Service.

“We have got to pass another bill,” Bennet said. “My view is we should all be back there today negotiating that bill, and I’m sorry that we’re not.”

► This Op-Ed in The Denver Post has Sen. Cory Gardner pegged: 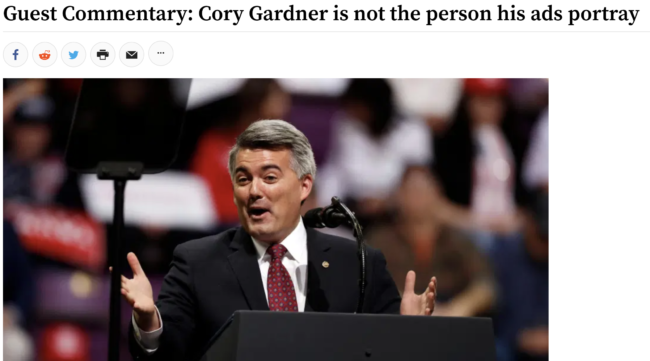 Hypocrisy and dishonesty are two of Cory Gardner’s strongest traits. In Colorado, Gardner tells voters that he fights “to protect our values and future.” In Washington he is a Trump sycophant, voting the Trump agenda 89% of the time. This champion of Colorado “values and the future” has voted for billions in subsidies for fossil fuels, voted against limits on carbon pollution, voted to undermine scientific reviews, and voted against strengthening environmental protections…

…The weakening of environmental safeguards, failure to defend the Constitution, and fiscal irresponsibility should not be tolerated by Colorado voters. It is time to remove Gardner from the Senate.

► On Monday the Denver City Council killed a barely-baked proposal from Councilwoman Candi CdeBaca to put a vague measure on the November ballot that sought to defund the Denver Police Department and replace it with a “peace force.” As we wrote on Monday, this is not how to approach real police reform measures.

► As 9News reports, a St. Louis man who made headlines for waving a gun at protestors IS GOING TO SPEAK AT THE REPUBLICAN NATIONAL CONVENTION next week:

McCloskey will speak at the online convention, which is scheduled for Aug. 24 through 27, according to Al Watkins, one of the lawyers representing the couple.

Watkins said McCloskey was called by Mark Meadows, President Donald Trump’s Chief of Staff. The date of his speech has not yet been set.

McCloskey and his wife Patricia were charged with unlawful use of a weapon/flourishing after video showed them brandishing guns at protesters who were on their way to Mayor Lyda Krewson’s house. The group was upset with Krewson’s decision to say the names of those who wrote to her, urging her to close the city jail, known as The Workhouse.

► Students at the University of Colorado-Boulder are moving in to their new residences this week.

► Mississippi has narrowed a list of potential new state flag designs down to these five.

► Ladies and gentlemen, the actual President of the United States of America:

“And we moved the capital of Israel to Jerusalem. That’s for the Evangelicals. You know, it’s amazing with that: the Evangelicals are more excited by that than Jewish people.” pic.twitter.com/nO8aIzuZJa

As you may be aware, Jerusalem has been the capital of Israel since…always.

► Somebody might need to tell Republican Casper Stockham that Denver is not located in CO-7. Although, to be fair, neither is Stockham.

► Congressman Ken Buck (R-Greeley), who moonlights as the State Republican Party Chairman (or vice-versa) has absolutely nothing useful to say:

This is nothing more than #Russiagate 2.0.

Speaker Pelosi is using USPS conspiracy theories to meddle in the 2020 election.

What happened to providing meaningful COVID-19 relief for struggling Americans?https://t.co/1sQdsqyP4I

This Tweet is just from Monday, but it did not age well considering today’s report from the U.S. Senate affirming Russian interference in the 2016 election.

► Denver hit a record high temperature of 98 degrees on Monday and is likely to set another record today.

► It’s Deja Vu all over again (again) on the latest episode of The Get More Smarter Podcast: