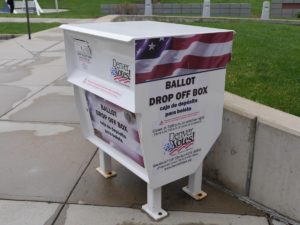 NPR reported yesterday that mail ballot collection boxes, which have proven highly popular among Colorado voters–and that’s before President Donald Trump started monkey-wrenching the U.S. Postal Service coincidentally just a few months before an election he insists without factual basis will be defraudulated by mail ballots:

Tennessee Secretary of State Tre Hargett…told the U.S. Senate Committee on Rules and Administration recently that his state doesn’t allow drop boxes for fear voters might be pressured to vote a certain way.

“If someone knows you’ve got an absentee ballot, they can say, ‘Hey I’ll be glad to take that for you and drop that off for you.’ They can ask to watch you fill that ballot out or they cannot turn it in at all for you,” Hargett said. “We believe it’s a great security measure to have someone returning their own ballot by the United States Postal Service.”

The Republican National Committee and the Trump campaign have even gone to court to try to block Pennsylvania from using such boxes in November, arguing they could increase the chances for fraud.

But in the battleground state of Pennsylvania, Republicans are already challenging the state’s use of drop boxes, arguing in a lawsuit that allowing ballots to be collected in the boxes “allows illegal absent and mail-in voting, ballot harvesting, and other fraud to occur and/or go undetected, and will result in dilution of validly cast ballots.”

Responding to this latest angle on the same old low-information fight over the logistics of mail ballots, which have been in uncontroversial and highly successful use in Colorado since 2013, Colorado Secretary of State Jena Griswold tore into the Republican National Committee and the Trump campaign today for asserting without evidence what Colorado’s experience has already wrong:

“Colorado’s election model is the nation’s gold standard, and we use both mail ballots and ballot drop boxes,” said Secretary Griswold. “Mail ballot drop boxes are safe, secure, and add great access to voting. In fact, about 75% of mail ballot voters return their ballots to a drop box. Our use of drop boxes is even more crucial as the U.S. Postal Service is under attack.” [Pols emphasis]

…Colorado drop boxes are safe and secure. Drop boxes are sturdy, metallic, weather-resistant, and are bolted to the ground. Colorado law also requires that all drop boxes be kept under 24-hour video surveillance with adequate lighting in order to be able to easily detect potential tampering. When drop boxes are emptied, they are done so at least every 24 hours by a team of bipartisan election judges who must maintain a detailed chain of custody log when transporting ballots between drop boxes and the central counting facility to ensure no ballots are removed or added.

With budget cuts and other attacks on the U.S. Postal Service, [Pols emphasis] Colorado’s election model is uniquely insulated to withstand any service disruptions. Ballots are sent to voters starting 25 days before Election Day and voters are reminded that they must return their ballot via drop box instead of the mail within eight days of the election. In addition, during the 2020 legislative session, Secretary Griswold led the Colorado legislature to pass a law requiring replacement ballots be sent via first-class mail starting 11 days before Election Day.

With uncertainty growing about the reliability of a politicized U.S. Postal Service to support mail ballot elections that have gone off without a hitch year after year in Colorado, our state’s already very high utilization of ballot drop boxes at libraries, municipal offices, and other public locations could be an important countermeasure against shenanigans. Because there is no rational justification for the alarm that Trump and his surrogates are now raising about mail ballots, especially in Colorado where in our state’s successful history with mail ballots makes all of this talk look ridiculous, if there’s going to be a problem it’s increasingly clear that Trump is going to have to manufacture it.

In that event, Coloradans on both sides of the aisle will have an outsize role in stopping the madness.