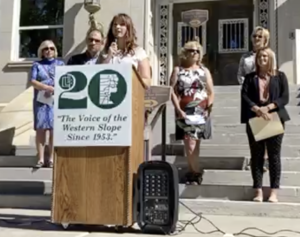 We are SO over…unless you want to try again.

It’s been almost two weeks since the campaign for Democratic U.S. Senate candidate John Hickenlooper made it clear that it would not be participating in the annual “Club 20” debate on the Western Slope of Colorado. Club 20 is apparently having trouble moving on.

On Monday, Club 20 did the political equivalent of posting a sad breakup video to its Instagram page. Six whole people — all of whom are Republicans — from the Western Slope political/business/civic group stood on the steps of a courthouse building in Grand Junction to lament that Hickenlooper was no longer returning any of their calls or text messages.

As Joey Bunch reports for the publication formerly known as the Colorado Statesman:

Western Slope business and community leaders reminded former Gov. John Hickenlooper of his work to bridge the rural-urban divide Monday as they urged him to reconsider his decision to snub the Club 20 debate in Grand Junction next month.

The executive director of the business and civic coalition, Christian Reece, said organizers were “astonished” that he would bypass the Western Slope event that traditionally signals the homestretch of campaign season. Moreover, the event is online this year, Sept. 18-19.

Club 20 officials noted they have gone to “great lengths” to accommodate health concerns around the COVID-19 outbreak by moving the political debates online and offering them free through streaming produced by Colorado Mesa University.

That’s very nice that Club 20 has gone to “great lengths” to accommodate COVID-19 health concerns, but this is sort of like responding to your spouse’s complaints about your behavior by getting a haircut. As we wrote last month, Club 20 marginalized itself by always using a stick and never a carrot in its political dealings with Democrats, and over the years its annual election year gathering became more of a gripe session for oil and gas interests than anything else. In 2018, Democratic gubernatorial candidate Jared Polis became the first major statewide candidate to skip the Club 20 debate; despite predictions of electoral doom from Club 20 supporters, Polis went on to win the race for Governor by 11 points. Polis even did pretty well in Western Colorado.

As Eric Washburn, a fifth-generation Coloradan who lives in Steamboat Springs, told Joey Bunch in an interview:

“I don’t think this reflects an animosity toward Club 20,” he said. “It’s a sense that Democratic politicians have that they certainly want to plug in to the West Slope and attract West Slope voters.

“I don’t think they’re convinced Club 20 is the way to do that.” [Pols emphasis]

Club 20 is trying hard to convince folks that dissing its membership is the same thing as ignoring the Western Slope, but it’s not working. Club 20 doesn’t represent the Western Slope any more than your dog represents all canines in Colorado, so perhaps they should look inward instead. Alas, self-reflection is not a strength for this group. Club 20 is still in that post-breakup stage of blaming all of its problems on the other person (or party, in this case).

As Charles Ashby reports today for the Grand Junction Daily-Sentinel, this breakup with Club 20 was a long time coming:

…state Sen. Kerry Donovan, a Vail Democrat whose district includes Delta County, said it’s because Club 20 isn’t what it used to be.

The group that touts itself as the “Voice of the Western Slope” has increasingly become less of a general voice for people on this side of the Continental Divide, and more concerned about conservative ideals, including not addressing such things as climate change, she said…

…Rick Ridder, a Denver-based political consultant who solely works for Democrats but isn’t on anyone’s payroll at the moment, said not only has the group’s debates become one-sided to favor Republicans, but the group itself no longer seems to speak for the Western Slope.

“Democrats have increasingly shied away because it’s become a gotcha forum, and the issues that are directed are not the ones that they’re hearing on the streets of the growing areas of the Western Slope,” said Ridder, who has attended Club 20 events for more than 30 years. “It’s a very different environment now. There are very different agendas from a political standpoint from the old Club 20. It’s become a little bit of a hostile environment when those who seek questions on their issues are not necessarily reflective of the issues that candidates are hearing in other situations.” [Pols emphasis]

Hickenlooper’s 2020 opponent, incumbent Republican Sen. Cory Gardner, is trying to make it look like he is the true debate warrior and that Hickenlooper is ducking him…which conveniently ignores the fact that Gardner has thus far only agreed to attend one debate at the same time and location as Hickenlooper (in Pueblo in October).

As for Club 20, they can make an effort to be more inclusive and see where that leads them in the future…or they can just keep writing mean things in all capital letters in their diary. The latter may make them feel better, but it’s not going to change anything.