Enough About Sad Club 20; This Argument is Settled

In today’s Denver Post political newsletter “The Spot,” reporter Nic Garcia resurrects a topic that was a brief flashpoint last summer: The demise of Club 20 as a statewide political power. Garcia takes a tone that is oddly deferential to Club 20 and glosses over the reality that the organization made itself irrelevant with a rightward partisan lurch over the last decade:

It has been 205 days since then-Democratic gubernatorial candidate Jared Polis declined to debate his Republican opponent, Walker Stapleton, in front a crowd of Western Slope movers and shakers.

While Polis’ apparent snub of Club 20 meant little to the general public, his calendar conflict sent shock waves through the state’s political class and reinforced – rightly or wrongly – a long-held belief that Colorado Democrats don’t care about the rural parts of the state. [Pols emphasis]

This “Democrats hate rural voters” narrative is what Club 20 has clung to in its desperation to remain relevant, but the truth is much simpler: Polis skipped the group’s annual kiss-the-ring gathering in Grand Junction in 2018 because he and his campaign correctly understood that Club 20 doesn’t represent rural Coloradans any more than groups like the Colorado chapter of the NFIB accurately reflect the interests of everyday small business owners.

Club 20 has long presented itself as the voice of the Western Slope, which might have been true at one point; but in the last several election cycles, Club 20 has consistently favored right-wing candidates and oil and gas interests at the expense of all other constituents. When Club 20 zigged right, it never bothered to turn around to check if anyone else was following along. It is true that the annual Club 20 debates were once a key date on the election calendar; people also used to wear leg warmers in public. Things change.

Last summer, Club 20 complained loudly about Polis’ decision to skip their gubernatorial debate – at one point, calling the decision “simply outrageous” – but the absence of the Democratic nominee did little to hurt his General Election hopes. The Republican Governor’s Association later tried hard to spin the Club 20 snub as a broader diss of the Western Slope…which also went nowhere.

This is the point where we remind you that Polis won the election by nearly 11 points over Republican Walker Stapleton.

Polis is Governor today because he outperformed Stapleton in the more heavily-populated parts of Colorado, but he also held his own on the Western Slope. Take a look at this county-by-county map of the 2018 gubernatorial election via the New York Times. You’ll notice that the left side of the map is not engulfed in a giant swatch of red: 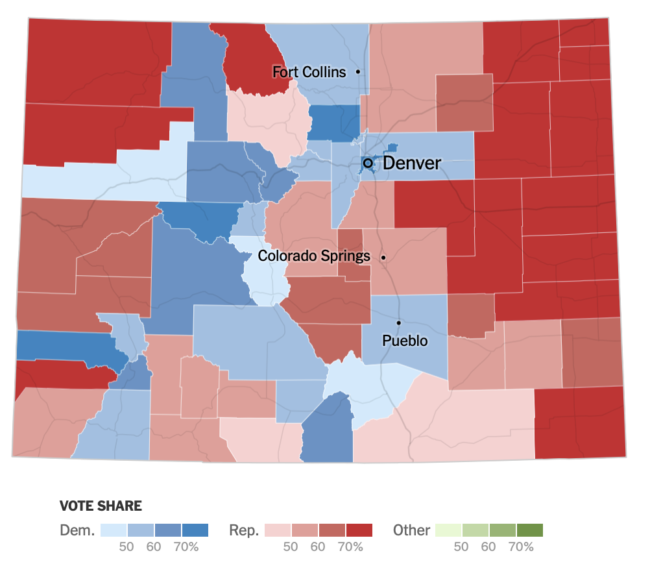 Results from 2018 Governor’s race in Colorado, via The New York Times

Stapleton carried West Slope counties like Mesa, Delta, and Montrose. But Polis actually came out ahead in counties like Garfield, Routt, and Gunnison. Polis held events all across the Western Slope and did just fine, proving that a statewide candidate can differentiate between the lobby groups and the West Slope voters.

The headline of “The Spot” newsletter posits the wrong question when it asks, “After apparent snub, has Polis regained this group’s trust?” To whatever degree that there is a burden of reconciliation in this case, that responsibility rests solely on Club 20.