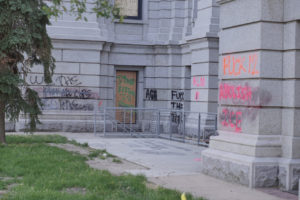 As anyone who has driven through downtown Denver in the last two months knows, the weeks of protests against police brutality in the wake of the death of George Floyd in Minneapolis have resulted in a significant amount of as-yet unrepaired property damage to public buildings and monuments. Statues with connections to atrocity and other historical sins have been toppled or pre-emptively removed, windows on the state capitol and other state buildings boarded up, and graffiti thick and overlapping on the walls. It’s not practical to initiate a comprehensive cleanup of the damage while it is still accumulating, not to mention the health risk of sending work crews out in a pandemic, but Gov. Jared Polis recently announced the cleanup would begin as quickly as possible.

In the meantime, Colorado Republicans have seized upon the graffiti and property damage around the Capitol to frighten their base and declare “ruling Democrats” responsible for not just “failing” to clean it up, but allowing it to occur in the first place due to their insufficient commitment to “law and order”–being bleeding-heart liberals who probably secretly want to be out there smashing windows themselves. Former GOP Rep. Mark Hillman howled with faux outrage in an op-ed attack earlier this week on Gov. Polis and Denver city officials:

Today, the grand old building stands disgraced as never before by vandalism that began in late May and — due to the inaction of Gov. Jared Polis and Denver Mayor Michael Hancock — has continued for weeks. Sprayed profanities reach 15 feet high on its marble walls…

The exterior walls of the Colorado Capitol are granite, but we digress.

Never in its 126 years has our Capitol been so disgraced, not only by the mobs who attacked it but by the leaders entrusted to protect it.

Gov. Polis and Mayor Hancock shut down productive businesses for COVID-19, but they’ve done nothing meaningful to stop anarchists from attacking our Capitol or law-abiding citizens. Denver District Attorney Beth McCann gives vandals a free pass for “crimes against property,” so arrests are rare. Denver residents must wonder why they pay steep taxes on property that police and prosecutors deem unworthy to protect. 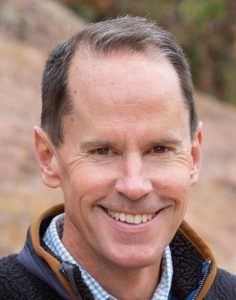 That last swipe at Denver District Attorney Beth McCann appears to have a step too far, prompting a a devastating return-fire op-ed in the same Colorado Springs Gazette Hillman used to disparage her office:

Mark Hillman recently opined in this publication that I have given a pass to people who commit property damage (“THE PODIUM: Once-stately Capitol now an eyesore, July 29). That is simply not true. My office files cases against people who commit property damage every day…[s]ome conservative writers are telling a different story. According to their narrative, protesters in Denver are engaging in violence and vandalism while the city’s progressive leaders stand by idly. It’s a false narrative. It’s offensive. And it’s dangerous because it makes an enemy of people who have something valuable to teach us. [Pols emphasis]

We are experiencing an important moment in history. The recent protests have called upon all Americans to take a hard look at our history, to confront practices that trigger the use of excessive force, and to examine the ways in which our current systems are inequitable to people of color. Colorado is rising to this moment. The recent enactment of SB-217, the police reform bill, is proof. That new law represents progress that has emerged from this moment in our history. The recent passage of the Caring for Denver initiative is another step in the right direction to help those suffering from mental health and substance abuse issues who often find themselves involved in the criminal justice system.

There is still much more to do. In addition to racial injustice, we are confronting a global health pandemic that is taking a huge toll on our people and our economy. While Denver’s mayor and Colorado’s governor acted quickly to curb both COVID-19 and its economic devastation, we simply cannot ignore that they did so in part because our national response has fallen woefully short. That shortfall — not progressivism — is the root cause of our current issues concerning the pandemic. The shortfall has caused millions of people to lose their jobs and their health care and thousands to lose housing and to get sick and die.

It’s a very illustrative exchange, folks. If Republicans want to move past the superficial whining about graffiti and broken windows and talk about the underlying cause of those problems–and from there, the underlying cause of a much greater range of problems we’re facing today as a nation–Democrats are excited to do that in the summer and fall of 2020. The damage done in the recent protests will of course be repaired, and as DA McCann explained above Colorado is taking a national leadership role in addressing the hard questions that challenge law and order instead of simply answering violence with violence.

And with that, we lost Mark Hillman. As soon as the conversation moves beyond despairing the broken windows to asking why they’re broken, these guys have got nothing useful to contribute.