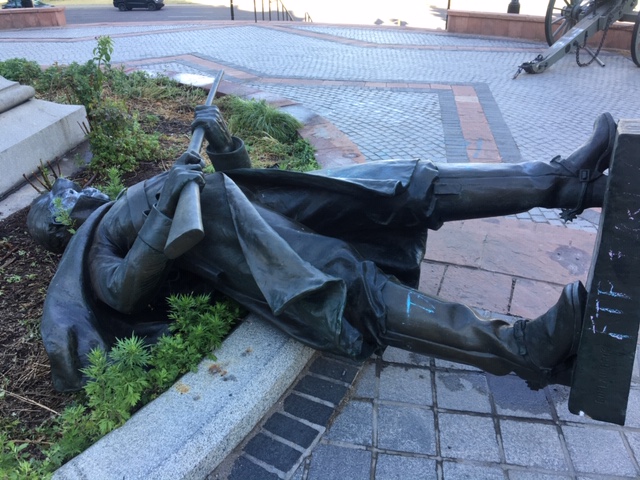 As the Denver Post’s Shelly Bradbury reports, a statue on the west side of the Colorado Capitol building with a decidedly mixed legacy was torn down late last night:

The Civil War monument erected in 1909 outside Colorado’s Capitol that commemorated, in part, the Sand Creek Massacre was toppled overnight, the latest act by protesters across the nation to tear down statues honoring perpetrators of racist acts.

[State official Doug] Platt also said he believes this is the first statue to be toppled during the protests since Floyd’s death, but said “just about everything in the complex has been vandalized.”

One the one hand, the Civil War Monument at the Colorado State Capitol honors the Union side of the conflict, which although the motivations are a bit murkier in retrospect is generally considered by history to be a war fought to end slavery in the United States. Colorado forces loyal to the Union played a key role in stopping the north and westward advance of the Confederate Army at the Battle of Glorieta Pass in New Mexico, known rather exaggeratedly as the “Gettysburg of the West.”

Unfortunately, however, the history of the Colorado military forces organized to fight in the Civil War does not end with that conflict. On November 29, 1864, the “hero” of Glorieta Pass Col. John Chivington led an attack on a peaceful encampment of Cheyenne and Arapaho people at Sand Creek, killing over 150 people, mostly women, children and the elderly. The Sand Creek Massacre forever sullied the reputation of the Colorado military forces who fought at Glorieta Pass, and eventually resulted in an additional plaque on Denver Civil War Monument placed by the state senate in 1999 acknowledging that the “Battle of Sand Creek” was in fact a massacre, not a battle as monument’s original inscription claimed.

However you may feel about the campaign across the nation to take down monuments commemorating Southern Civil War leaders and other unrepentant racists in American history, it’s very important to understand the full history of this particular monument in order to fully grasp the controversy. It’s true that this is/was a monument to Union forces who fought on the side of ending slavery. But it also commemorates what could be the greatest crime against humanity committed on Colorado soil.

We don’t condone property destruction, and would prefer to see any such changes occur by peaceful means instead of late-night vandalism. We simply try to understand the full truth of these events, which in this case is more complicated than first appearances indicate. With that, readers, tell us what you think about this event.

Is this erasing history, or setting history right?