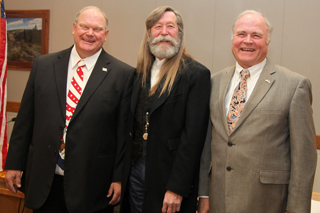 “The Air Quality Control Commission is required to analyze the economic impacts, and they didn’t do that,” Garfield County Commissioner Tom Jankovsky said in an interview. “We have banded together to provide a rural voice for the public welfare, environmental concerns and economic viability of our communities.”

…Garfield County has around 11,000 active wells, and some of them nearing the end of operational life, Jankovsky said.

“It would be a crime to have to shut those down because the air quality rules make them not economical to run. The rules cost more than the gas they’re producing on an annual basis,” Jankovsky said.

Garfield County hopes the lawsuit will result in striking down four aspects of the new rules the county says would be overly burdensome on oil and gas operators, and contribute little to improved air quality.

As the Grand Junction Sentinel’s Dennis Webb reported, these counties with lots of oil and gas extraction are essentially arguing that the state should cut them a break on air pollution regulations–because they have so much air pollution it would be uneconomical to stop polluting! If that sounds directly counter to the point of passing said regulations, that’s because it is:

“Rather than regulating for all Coloradoans, as the Air Pollution Prevention Control Act requires, the Air Quality Control Commission took a one-size-fits-all approach that assumed its new regulations would impose roughly equal costs on all Coloradoans. That assumption was false,” the suit says. “The diversity of Colorado’s economy — and, in particular, the heavy reliance many western and rural counties place on oil and gas activity — means those counties will bear a disproportionate share of the costs of the Commission’s increased regulation.”

Well yes, that’s inevitable, the counties with air pollution are are going to be most “impacted” by regulations to reduce air pollution! Forgive our incredulity, it is not our purpose here to make light of legitimate fiscal dependencies and burdens that may exist in different areas of the state. But it’s not even a little bit surprising that oil and gas producing regions are going to have a bigger job cleaning up their act than areas of the state that do not emit vast quantities of air pollution. The goal of reducing air pollution across Colorado–and that is the state’s avowed policy goal backed by a lopsided electoral mandate in 2018–is not served by exempting areas of the state precisely because they are major pollution sources.

In fact, everywhere outside the boardroom of an oil and gas company (and a few very accommodating county commissioners) this whole business is quite silly. Air pollution doesn’t respect county borders, or for that matter any other border. So in essence, Garfield County is arguing that it has a right to make the rest of Colorado breathe their dirty air. Given the statewide political and environmental implications for this suit, we’ll be watching closely as the legal system grinds back into gear.