RELEASE: Musicians and Fans to March on Greenwood Village

DENVER: After the passage by the City of Greenwood Village of Resolution 40-20, an ordinance to shield Greenwood Village Police officers from civil liability for misconduct in response to landmark bipartisan legislation by the Colorado General Assembly to comprehensively reform the relationship between police and the communities they serve, nationally prominent artists with ties to Colorado called on the city to overturn Resolution 40-20 and have pledged not to perform at Fiddler’s Green Amphitheater.

“We support the Black Lives Matter movement and were so proud to see Colorado lead the nation in implementing police reform last month by passing Senate Bill 217 with a huge bipartisan majority,” writes musician Nathaniel Rateliff in a letter to the Mayor and City Council of Greenwood Village, Colorado. “We were appalled last week to learn that the City of Greenwood Village, CO passed a resolution to undermine the applicability of SB20-217 within its community…[t]he new resolution shockingly predetermined all future police abuse as justified to further shield bad officers from enforce- ment mechanisms created within SB20-217. Recently we have discussed plans to play at Fiddler’s Green, we write to you today to publicly announce that we will not play music there until Greenwood Village rescinds its recent resolution permitting police to act without accountability.”

“Fiddler’s Green is one the largest sales tax generating establishments in Greenwood Village. Artists and fans should not be forced to financially support a City government that has established such racist policies to perform in Colorado or see their favorite artists perform locally. In fact, no one should,” said Wesley Schultz and Jeremiah Fraites of the Lumineers.

Read the full letter from Wesley Schultz and Jeremiah Fraites of The Lumineers to Greenwood Village here.

“The passage of Senate Bill 217 in Colorado was a watershed moment for our state in the decades-long struggle for the most basic of civil rights: the right to not be murdered by our own police officers because of the color of our skin,” said Rep. Leslie Herod, one of the prime sponsors of Colorado’s landmark new police accountability law. “Greenwood Village’s terrible decision to short-circuit police accountability means that Black people, and for that matter anyone who comes into contact with their armed municipal security forces, are not safe. As long as Resolution 40-20 is the law in Greenwood Village, it would be dangerously irresponsible to hold, attend, or promote any event at Fiddler’s Green Amphitheater located in their city.”

On Monday, July 20, Wesley Schultz of The Lumineers, Nathaniel Rateliff & the Night Sweats, Spirit of Grace, Flobots and other recording artists will march with Rep. Leslie Herod, Rep. Meg Froelich, and Sen. Jeff Bridges and people from across Colorado to Greenwood Village City Hall. 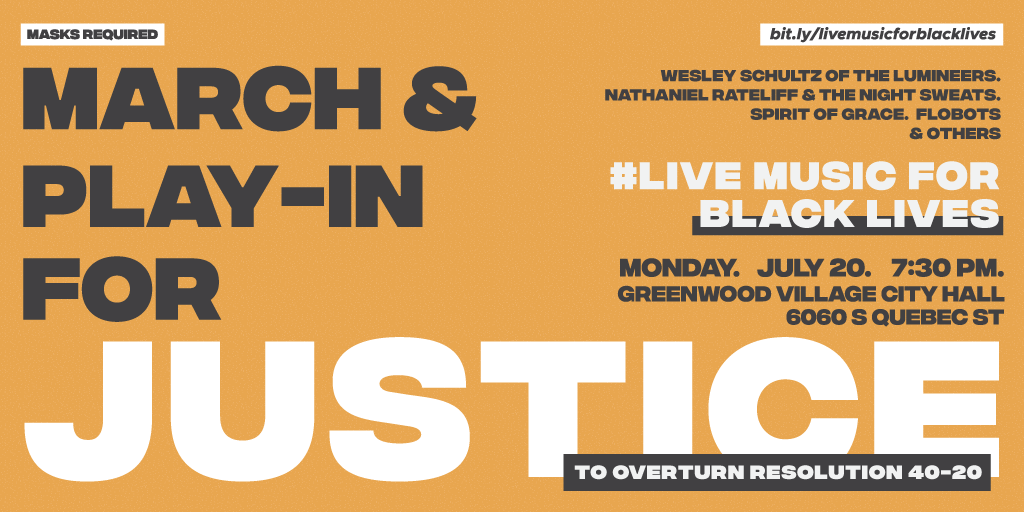