UPDATE #2: Rep. Ed Markey (the Democrat from Massachusetts — the male Markey) chimes in with his own quote:

“As the other Markey in Congress, I’ve always admired and respected Betsy’s intelligence and political independence. The fact is, we don’t always vote the same way, and we don’t even look alike! I’m wondering whether all of the attacks Cory Gardner has levied against Betsy over the last several months were based on a fundamental confusion over exactly which Markey he is trying to attack.”

UPDATE: We’ve created this handy-dandy tool that allows you to quickly figure out which Markey you are trying to discuss — Ed or Betsy (just trying to do our civic duty!): 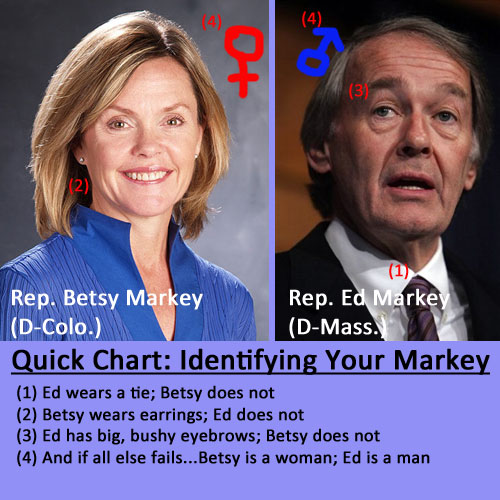 That’s the new ad up from CD-4 GOP candidate Cory Gardner, attacking incumbent Betsy Markey–one little, well actually not so little problem, is likely to see it pulled pretty quickly. Betsy Markey voted against the Obama administration’s 2010 budget along with a number of other “Blue Dogs,” Rep. Ed Markey (D-Mass.) is the Markey in Congress who voted for the budget. Rep. Markey’s (that is, Betsy Markey of Colorado) release follows, says spokesman Ben Marter, “Rep. Gardner’s new attack ad is lousy with the same already-debunked lies and misleading claims, but if there were degrees of ‘false’, this one takes the cake.” And our favorite quote from the release: “Colorado deserves better than Gardner’s half-baked hit jobs,” added Marter. “Frankly, Massachusetts deserves better too.”

We’ll be honest, we were expecting this mistake–but we thought one of the innumerable 527s glomming onto this race would have made it, not Cory Gardner’s campaign itself. It is kind of sloppy; two weeks from the election, this can’t be the first time they’ve run afoul of the wrong Markey.

This is one of the main reasons we’ve always maintained that Markey has a better-than-prognosticated chance at holding onto her seat. Gardner’s campaign has made so many unforced errors that all add up to a big problem in a close race. This latest ad is a perfect example; this silly, stupid, preventable error is going to lead to news stories that point out the fact that Markey voted against the Obama budget in 2010.

This line about Markey opposing Obama’s budget would not have been written about otherwise, but thanks to Gardner’s bumble, voters across CD-4 are going to hear, once more, that Markey might not be the lock-step Democratic voter that Gardner wants to portray her to be. Some of those voters might also start to question whether other parts of Gardner’s ads have been falsely attributed to that other Markey guy. That’s a pretty harmful blow to Gardner’s overall narrative.

The new ad accuses Markey (that’s Betsy Markey) of voting for “the most fiscally irresponsible budget in history.” However, Betsy Markey voted against the President’s FY 2010 Budget for just that reason. Markey (Betsy) felt the proposed budget was far too large, and did not include deep enough spending cuts from each of the federal departments.

“Rep. Gardner’s new attack ad is lousy with the same already-debunked lies and misleading claims, but if there were degrees of ‘false’, this one takes the cake,” said Markey (Betsy)’s campaign spokesman Ben Marter. “I would point Rep. Gardner to a site on the ‘internet’ to research his claims a little better: www.google.com. If Rep. Gardner can’t figure out how this whole voting system works, how can he be trusted to actually read bills?”