“The president did not fire him. He did not ask for his resignation,” Kelly, a retired Marine Corps general, said in an interview. “The president has clearly forgotten how it actually happened or is confused. The president tweeted a very positive tweet about Jim until he started to see on Fox News their interpretation of his letter. Then he got nasty. Jim Mattis is a honorable man.” 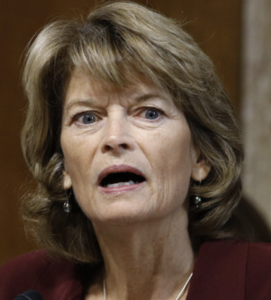 As CNN reports, Alaska Republican Sen. Lisa Murkowski is raising what has been a very low bar on the matter of expressing concern about President Trump:

Sen. Lisa Murkowski of Alaska broke with many of her Republican colleagues Thursday, applauding an op-ed by General James Mattis that condemned President Donald Trump’s actions this week.

“When I saw General Mattis’ comments yesterday I felt like perhaps we are getting to a point where we can be more honest with the concerns that we might hold internally and have the courage of our own convictions to speak up,” Murkowksi said on Capitol Hill.

The comments were a stark contrast to many of her other Republican colleagues on Capitol Hill who argued that while Mattis had a right to disagree with Trump, they didn’t agree with Mattis’ assessment [Pols emphasis].

Murkowski also claimed that she is “struggling” with the question about whether or not she will support Trump’s re-election in November:

“I am struggling with it. I have struggled with it for a long time I think you know that. I didn’t support the President in the initial election, and I work hard to try to make sure that I’m able to represent my state well that I’m able to work with any administration and any president,” Murkowski said. “He is our duly elected President I will continue to work with him. I will continue to work with this administration but I think right now as we are all struggling to find ways to express the words that need to be expressed appropriately, questions about who I’m going to vote for not going to vote for I think are distracting at the moment.”

Some Republican Senators were found on Capitol Hill Thursday shrugging off Mattis’ remarks. We haven’t yet seen or heard any comment from Colorado Sen. Cory Gardner.