UPDATE #3: The Denver Post’s Justin Wingerter updates as the battle between Gov. John Hickenlooper and a technologically-challenged Independent Ethics Commission rages on:

“John Hickenlooper has made clear he will testify in person. Today’s debacle of a hearing has made clear that WebEx doesn’t work for a legal proceeding like this,” said Melissa Miller, a spokeswoman for Hickenlooper, referring to the video conferencing program. “We will be opposing the motion to enforce the subpoena.”

…Thursday’s hearing followed a weeks-long dispute between Hickenlooper’s attorneys and the Independent Ethics Commission in which Hickenlooper announced he would not testify, was subpoenaed by the IEC, fought that subpoena in court, then lost his court fight late Wednesday, 11 hours before the hearing.

It’s far from resolved as business comes to a close Thursday, but the considerable technical trouble encountered in today’s hearing certainly helped underscore Hickenlooper’s argument that due process would not be served. We’ll update as the creaky wheels of COVID-addled justice continue to turn.

At times, the @Hickenlooper Independent Ethics Commission hearing has resembled an SNL skit, and that was BEFORE Turd Ferguson showed up! #copolitics #9News 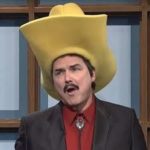 The Colorado Independent Ethics Commission is today conducting — via something called WebEx — an ethics hearing into a hamhanded complaint against former Gov. John Hickenlooper made by an organization called Public Trust Institute that is basically a dark money-funded hit group. Hickenlooper did not want to appear at this virtual hearing because he was concerned about the glitchy software and buggy operation of the online hearing process.

He was not wrong.

As Marshall Zelinger of 9News Tweets:

Amazing! She probably doesn’t know it, but opening statement by Suzanne Staiert in Independent Ethics Commission hearing on @Hickenlooper travel was briefly interrupted on my screen when “Turd Ferguson” popped into the meeting. No video. Just his name. #copolitics #9News pic.twitter.com/8LzZ09p6Gz

Turd Ferguson is still in the room. Look at the bottom of my screen. #copolitics #9News pic.twitter.com/Wb5dU4B2lo

Justin Wingerter of The Denver Post caught the absurdity early:

On the other hand, this meeting is a massive technical mess, which speaks directly to what Hickenlooper and his attorneys have been saying, that WebEx is no way to conduct a hearing into a serious matter. #copolitics #cosen

But don’t take our word for it. You can login yourself and watch the shit show.