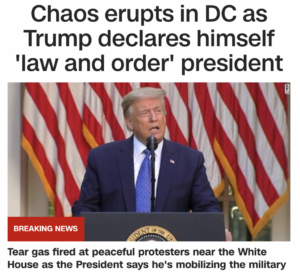 On Monday evening, President Trump at last addressed a nation reeling from nationwide protests. It went worse than you even could have guessed.

In his first remarks from the White House since massive protests have swept the country, President Trump said Monday evening that the looting and violent demonstrations in reaction to the death of George Floyd in police custody were “acts of domestic terror.”

If governors were unable to end the violence, he said, he would send in the military “to do the job for them.”

Trump’s remarks came amid reports that the president may try to enact the Insurrection Act in response to protests. Earlier in the day, Trump berated the nation’s governors during a conference call for a “weak” response to the protests.

After delivering his remarks, Trump was scheduled to walk to St. John’s church in Washington D.C., but not before crowds were cleared out of the way:

So just to be clear: Trump is pushing federal officials to violently clear peaceful protesters so he can have a photo-op.

He is the cause of the chaos he claims to be calming. https://t.co/8GsE8e7jI2