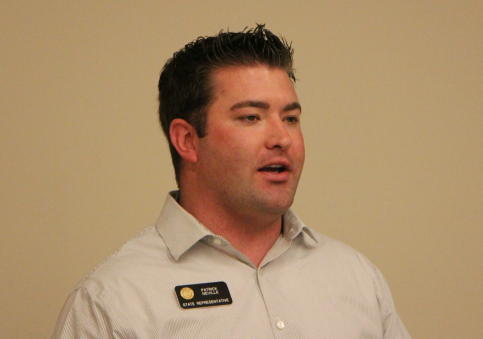 Yesterday afternoon, the Colorado House Republican Minority released a statement we assume they thought was very strong: demanding that Democrats “outright condemn” the last several days of protests over the killing of Minneapolis resident George Floyd, and essentially accusing Democratic lawmakers of supporting the violence committed by a tiny minority of protesters:

Over the past several days, chaos has erupted in the streets of Denver while supportive Democrats have shut down the State Capitol in “solidarity” with the rioters who have attacked police officers, blocked traffic, and destroyed public and private property. Some elected Democrats have actually gone out of their way to do everything they can to block police from stopping the rioters and restoring law and order.

Even more egregious, is that Colorado Democrats and Governor Polis will take swift action against business owners who try to reopen their small businesses and make ends meet, but will give “space” to criminals who start fires in the streets, lob homemade explosives at police, and deface the State Capitol in defiance of the rule of law.

The Colorado House Republicans call on all Democrats, starting with the House and Senate Democrats, to outright condemn these rioters.

We further call on Democrats to not block the prosecution of these criminals like they did in January when rioters disrupted the opening day of the Colorado General Assembly.

It’s time that Colorado Democrats, and the liberal press who enable them, take steps to condemn what’s happening around the State Capitol and see what’s most important here — protecting the innocent from harm and restoring law and order immediately.

It’s tough to know where to begin with this statement, which seems to ignore just about every known fact about the protests of the past few days. Democrats like Rep. Leslie Herod who have led the massive and peaceful daytime protests against police violence repeatedly urged their supporters to obey the law. Rep. Herod specifically exhorted protesters to respect the curfew imposed in Denver after the second night of unrest.

And that’s just the beginning. Did riot police deploy to restaurants that illegally reopened during the COVID-19 emergency? A few dozen climate activists who super-glued themselves to the rail in the House gallery are “a riot?” House Republicans are seriously suggesting that Senate President Leroy Garcia wanted his truck destroyed?

Failing to differentiate the peaceful protests across the nation and in Denver over the weekend from the actions of a comparatively small number of hoodlums after dark shows that Republicans don’t want to address “what’s most important here,” which is police brutality against people of color. Characterizing this weekend’s protests indiscriminately as “riots” only demonstrates that platitudes Republicans offer over police brutality in the wake of a major incident, like Colorado House Republicans did last week after the death of George Floyd, are meaningless.

We’re not surprised that’s how Minority Leader Pat Neville feels, after Neville has spent pretty much every day since the 2018 elections marginalizing his caucus and sullying the Republican brand. But to see the whole GOP House minority sign this disgraceful letter…

Well, that’s pretty shocking. And we hope there are some privately delivered apologies.