FRIDAY UPDATE: Cory Gardner’s backside in the breeze is how our Memorial Day Weekend kicks off:

Gardner and others had clamored for immediate reform to the Paycheck Protection Program, and Sen. Susan Collins (R-Maine) and a bipartisan crew of senators introduced a bill to do just that, by extending the time businesses can use those loans from eight to 16 weeks. Yet it will have to wait at least a few days, if not longer. Gardner also said he’s been assured the Paycheck Protection Program bill will be taken care of in June.

The Colorado senator said Wednesday he was willing to fight plans to head home for recess to get a whole list of his priorities enacted. And his likely opponent mocked him for not getting more.

“Cory Gardner made a big stink about keeping the Senate in Washington, but less than a day later, he’s given up and seems happy to do whatever Mitch McConnell says,” former Gov. John Hickenlooper said in a statement.

It’s a humiliating loss, folks. There’s no spin that can salvage it.

UPDATE: CNN’s Manu Raju reports that Cory Gardner, who started out demanding the Senate stay in Washington until another coronavirus relief bill passed, is now claiming to be content with “some things down the road” from Majority Leader Mitch McConnell. A safe bet this lowlight won’t be in the next ad:

Cory Gardner’s threat to try to block next week’s recess has been resolved, per John Thune. Gardner had called on the Senate to move ahead with a recovery plan. Thune says Gardner and McConnell have talked about doing “some things down the road.” Senators leaving town for recess

We’ll say it again: in a blue state, the only thing a Republican candidate can credibly offer is influence with fellow Republicans.

It looks like Cory Gardner hasn’t got much of that either. 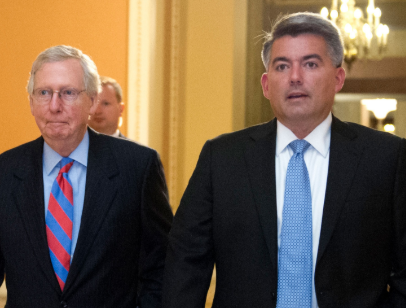 The Hill reported along with numerous national media outlets late yesterday that Sen. Cory Gardner was threatening to block the U.S. Senate from going quietly into recess until June without passage of another coronavirus relief bill–this after the House passed a comprehensive relief bill last week that Senate Majority Leader Mitch McConnell immediately pronounced dead on arrival:

Sen. Cory Gardner (R-Colo.) on Wednesday said that it is “unfathomable” that the Senate will leave for a one-week break before passing additional coronavirus legislation.

“It’s unfathomable that the Senate is set to go on recess without considering any additional #COVID19 assistance for the American people. Anyone who thinks now is the time to go on recess hasn’t been listening. Coloradans and Americans alike have sacrificed and are hurting,” Garder tweeted…

The Senate is not expected to pass additional coronavirus legislation before they leave town, with leadership in both parties telling The Hill that they did not expect a deal until at least June.

To be clear, Gardner has not come out in support of the HEROES Act passed by the House. He cited a grab-bang of funding priorities yesterday that we assume would be part of some kind of forthcoming legislation in the Senate, which we’re to believe Gardner was about to prevent the Senate from recessing in order to write, debate, and pass:

“We have an opportunity to perfect the Paycheck Protection Program, and to pass legislation to help infrastructure, to create stimulus jobs, economic opportunity, we should be doing everything we can to accomplish that,” he said. “We need to get the job done.”

Well folks, it’s Thursday afternoon in Washington, and Politico’s Burgess Everett has the update you could have predicted–the “unfathomable” has become fathomable!

Gardner says in interview that Senate is close to passing PPP reforms and he fees good at where they are at. Still, says they have to do more in June

We hope that every news outlet who reported on Gardner’s brave stand against Mitch McConnell yesterday updates with an equally prominent story on Gardner folding like an accordion today.