If restrictions imposed to fight COVID-19 are like slavery, then those who defy those orders are like civil rights icons.

That seems to be the view of some conservatives nationwide and in Colorado who have heralded those who are keeping their businesses open, protesting, or otherwise eschewing public health rules and recommendations as American heroes fighting for freedom.

And they’re even going so far as to compare these dissenters to the mother of the civil rights movement herself, Rosa Parks. 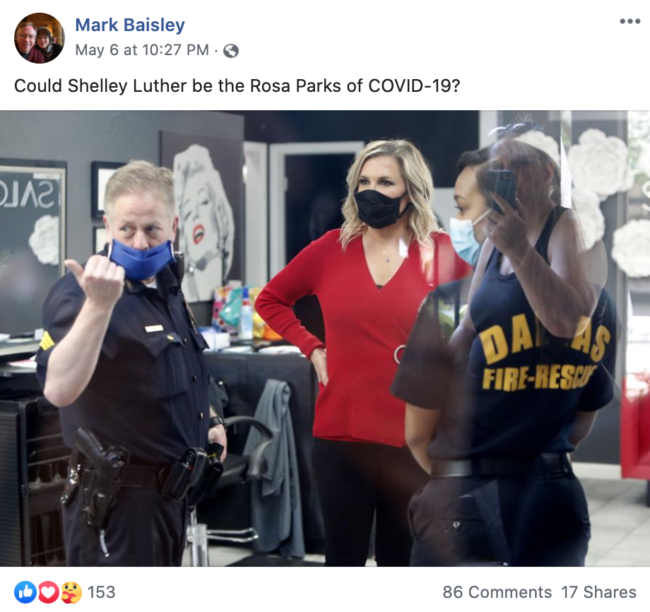 Luther, who owns a salon in Dallas, became a conservative hero after she refused to close her shop during Texas’ stay-at-home order, and was fined and briefly jailed after ignoring a court order to shut down.

Asked to address criticism that such comparisons are racially insensitive, Baisley told the Colorado Times Recorder via email that anyone who would criticize his Facebook musings as such is “shamefully shallow.”

“As you can see on my Facebook page, I merely posed the question, ‘Could Shelley Luther be the Rosa Parks of COVID-19?’” Baisley wrote. “I think it is an interesting concept for my friends to ponder aloud and they did. Those who dismiss the question as racially insensitive are shamefully shallow in disallowing themselves to consider the full lesson of this important moment in American history.”

“I call these people the modern-day Rosa Parks,” he said. “They are protesting against injustice and a loss of liberties.”

That led Jon Caldara, a local libertarian activist and provocateur, to pen a column in the Colorado Springs Gazette comparing yet another quarantine dissenter, a woman named Jennifer Hulan who illegally re-opened her restaurant in Centennial, to Parks.

“…Rosa Parks wasn’t arrested for carrying a sign at a protest,” Caldara wrote. “She broke the law by sitting in the wrong seat. Martin Luther King was arrested for breaking Alabama’s law against mass public demonstrations. These illegal acts helped wake a nation to its intolerance.”

“[Hulan] indeed is a modern-day Rosa Parks,” he concluded.

That column was then reposted in the conservative politics blog Complete Colorado and shared by the Douglas County GOP on Facebook.