Polis and the President: A Mutually Beneficial Exercise 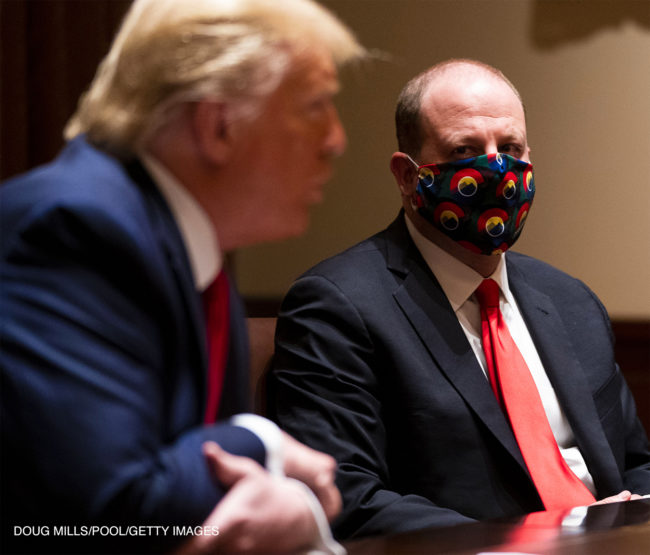 Colorado Public Radio’s Caitlyn Kim kicks off our coverage recap of yesterday’s visit by Gov. Jared Polis to the White House, which appears to have been successful for the state in terms of obtaining supplies to respond to the ongoing COVID-19 pandemic–an issue deep in political subtext for President Donald Trump, Sen. Cory Gardner, and other Republicans in the room with Gov. Polis yesterday:

Following a public discussion, the press left the room and the governors had a private conversation with the president and other state and federal officials. In a press conference following that, Polis told reporters he felt the need pursue all “possible options” for supplies for Colorado and it wasn’t an opportunity he could pass up. Polis said he was asked to talk about Colorado’s needs and update the president.

Polis said that he did not feel it was “a time to air differences on unrelated policies.” [Pols emphasis] He said both political leaders shared a single foe: the new coronavirus.

The Aurora Sentinel’s Kara Mason details some of the commitments Gov. Polis obtained:

Among the commitments Polis said he was able to secure from the federal government during his trip is approximately 96,000 tests, which he said will aid in the state’s goal to amp up testing to nearly 10,000 per day…

More deliveries of protective gear, including masks, from FEMA is anticipated to be delivered to the state for nursing home workers, Polis said, adding that he’s urged the federal government to continue that program into June and July.

But as Alex Burness of the Denver Post reports, yesterday’s meeting was not without its misinformation:

Colorado, which is at the vanguard of the all-mail voting trend, has shown that this is not true. [Pols emphasis] The state is widely regarded as one of the safest places in the country to vote, and the practice has been touted by Republican and Democratic state election officials alike. It’s also increased voter participation.

Speaking after the meeting, Gov. Polis made it clear that his purpose yesterday was not to challenge President Trump’s inaccurate statements, rebuke the administration for its deficiencies, or engage the President at all on issues unrelated to pandemic response:

“I’m here to advocate around COVID-19, around coronavirus, not to get into a debate or correct the president when he makes inaccurate statements about the reliability of mail-in voting,” Polis said in a press call after the meeting.

He clearly made an effort not to rankle the president. Asked whether he was impressed by Trump, Polis said, “He’s the president that we have,” three times in a 14-second span. [Pols emphasis]

We’ve seen a number of different reactions to Gov. Polis’ meeting with President Trump yesterday, ranging from relief that Polis stayed focused on productive discussions instead of sparring politically to irritation that Polis let any number of serious problems with the federal government’s management of the pandemic slide despite a golden opportunity to challenge Trump on national television. For our part, we expected Polis to stay professional in his dealings with the administration, as he has from the beginning of the emergency so as not to arouse the President’s wrath–and we would have been more surprised if Polis had turned this meeting into a pissing match with America’s undisputed pissing match titleholder.

Obviously the President benefits politically from a positively-framed meeting with a Democratic governor, but Polis benefits too: we have to think that Trump’s effusive praise for Gov. Polis’ controversial reopening of the state, ahead of any other Democratic governor, will help mollify the far right in Colorado led by GOP House Minority Leader Patrick Neville who have been clamoring for Polis’ political head. The shrill, distasteful attacks on Polis from high-ranking Colorado Republicans like Neville have gone on ignorant of the reality that Polis is taking a big risk to do exactly what they want. They won’t hear it from Polis, but maybe they’ll hear it from Trump.

If this all leaves you feeling a bit unsatisfied politically, it’s understandable. But it’s important to keep in mind what both Trump and Polis were looking for get out of this meeting. Trump earns one somewhat less scandalous news event–certainly not enough to overcome the overwhelming view of Americans that Trump’s pandemic response is a failure. Trump’s fictional characterization of mail ballots seems to have been fact-checked and debunked in real time by most news stories that mention it. Meanwhile, Polis gets cover from the very top against the fringe-right hordes turning out to protest and commitments for more equipment the state needs, while solidifying his reputation for staying cool in moments of political adversity.

As long as the numbers–for once we’re not talking about poll numbers–keep moving the right direction, Gov. Polis and Colorado come out ahead here. And we hope there’s nobody on either side who wants to bet against that.