Why Can’t Jared Polis Fight Back, You Ask? 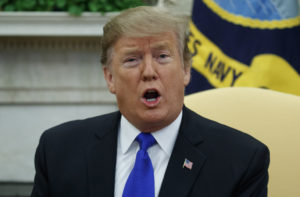 Responding to the latest damage control efforts from the Trump administration over the co-opting of 500 ventilators previously bound for Colorado, Gov. Jared Polis was more diplomatic than we could ever hope to be–but did not change the state’s position, via the Colorado Sun’s Unaffiliated newsletter today:

A Polis spokesman did not address the FEMA statement directly, but reiterated to The Post what the state was told — that Colorado’s order had been canceled by FEMA. [Pols emphasis] Polis first made the claim about the federal government taking ventilators from Colorado on CNN, but since then he’s declined to discuss it.

As we explained previously today, the facts don’t support sloughing the blame for the Federal Emergency Management Agency (FEMA) commandeering Colorado-bound ventilator machines off on Gov. Polis. Reports across the country suggest that the Trump administration is appropriating large amounts of medical equipment ordered by other entities; and local governments who complain are getting similar excuses. While it’s true that the federal government has the power to do this, it frustratingly contradicts President Donald Trump’s own advice that states go it alone to buy equipment on the open market.

And the real problem, as Sen. Cory Gardner’s ham-fisted prevailing on Trump personally for 100 of the 500 ventilators originally ordered revealed, is Trump’s redistribution of the equipment is based on politics instead of medical need.

Last week’s scandal over 500 ventilator machines commandeered by the Trump administration, of which 100 were “generously” returned after Gardner kissed the proverbial ring, threw into sharp relief an emerging central truth about Donald Trump’s leadership in the greatest crisis the United States has faced since the Second World War: politics, as it has improperly dominated Trump’s foreign and domestic policy agenda, is the principal consideration governing Trump’s response to the COVID-19 pandemic. Trump’s smack-talk spats with Democratic governors like New York Gov. Andrew Cuomo were made much darker by overt suggestions that he doesn’t talk to governors he doesn’t like, even in the midst of the current emergency.

Tell the Democrat Governors that “Mutiny On The Bounty” was one of my all time favorite movies. A good old fashioned mutiny every now and then is an exciting and invigorating thing to watch, especially when the mutineers need so much from the Captain. Too easy!

This Tweet from Trump this morning can be easily interpreted as a not-so-veiled threat against Democratic governors who have complained about any number of deficiencies in the federal government’s response to the pandemic–from commandeered equipment to the woefully inadequate testing program which forced Democrat and eventually most Republican governors to shut down their states’ economies to slow the spread of the virus. This Tweet, even judged against Trump’s unprecedented disregard for basic standards of integrity and decency that have been observed by every previous American president, is monstrous and shameful to a hardly comprehensible extreme.

And yes, this horrendous situation, in which life-and-death decisions in a global crisis are at the whim of an incompetent, amoral President and his equally amoral political subordinates, is precisely why Gov. Polis is exercising such restraint in responding to Trump’s daily roller-coaster of outrageous mismanagement. To not do so could invite Trump’s wrath, and that could result in Coloradans dying.

For Gov. Polis’ steadiness under pressure, every Coloradan should be grateful.

But it’s disturbing to speculate how much lower Donald Trump might go.