Cory Gardner is in Worse Trouble Than You Thought

Late yesterday a new poll on the Colorado Senate race from Montana State University and The University of Denver came out with some pretty stunning numbers. From Forbes:

The poll, released by Montana State University on Tuesday, has Hickenlooper leading Gardner by 17 points, 48% to 31%, in a race that will be pivotal in determining control of the Senate.

If you are a supporter of Sen. Cory Gardner (R-Yuma), this is the point where you start railing on the MSU/DU poll for a bad methodology, shaky margin of error, using trained monkeys to conduct phone surveys, blah, blah, blah. This argument might even get you somewhere, if not for another completely different poll, with a completely different methodology, showing pretty much the same deficit for Gardner. 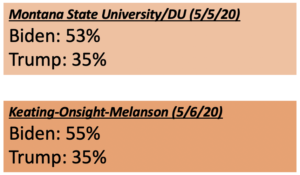 The Keating-Onsight-Melanson poll of likely voters, made available in advance of its release to Colorado Politics, shows Hickenlooper with 54% support to Gardner’s 36% in a hypothetical head-to-head contest, with 9% undecided and 1% picking another candidate.

The Democratic firms’ last survey, in October, found Hickenlooper with an 11 percentage point advantage over Gardner, 53% to 42%.

This is the way down, Senator!

That’s two different polls, released on two separate days, showing former Gov. John Hickenlooper — the frontrunner for the Democratic U.S. Senate nomination — with a 17-18 point lead over the incumbent Republican Senator, Cory Gardner. Again, we’re sure that you could dig into the methodology of each poll and come up with some complaints, but two polls with similar numbers? That’s not a coincidence.

Even if both polls are wrong, Hickenlooper is almost certainly ahead of Gardner by double digits. This also makes sense if you consider that the last top-ticket race in Colorado, for Governor in 2018, resulted in an 11-point win by Democrat Jared Polis over Republican Walker Stapleton.

There are also plenty of reasons to believe that these new polling numbers for Gardner are not outliers. Gardner’s approval ratings have been consistently in the toilet for more than three years now. — and as we’ve pointed out on more than one occasion, Gardner doesn’t even poll well among Republican voters. Hickenlooper, meanwhile, is a popular and well-known former two-term Governor of Colorado.

These numbers also track with top-of-ticket results; both new polls show Democratic Presidential candidate Joe Biden leading President Trump by an 18-20 point margin in Colorado. Biden probably isn’t going to beat Trump in Colorado by 20 points, but a double-digit margin of victory would not be a surprise (Hillary Clinton beat Trump by 5 points in Colorado in 2016; Barack Obama carried the state by nearly 9 points in 2008).

Cory Gardner isn’t just in trouble of losing the 2020 U.S. Senate race…he faces a very real risk that the National Republican Senatorial Committee (NRSC) could soon drop Colorado off the map entirely. Control of the U.S. Senate is very much in play in 2020, and with states such as Arizona and Maine moving out of reach for Republicans, the NRSC will have to make some decisions about where to best expend resources in hopes of holding onto states like Montana or North Carolina.

Hickenlooper is now handily beating Gardner in fundraising and in public polling. The trajectory of the 2020 Senate race is pretty clear.