Get More Smarter and May the Fourth Be With You 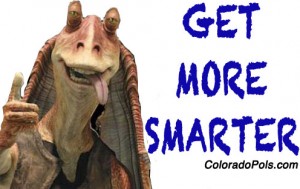 Happy Star Wars Day; please celebrate responsibly. Now, let’s Get More Smarter. If you think we missed something important, please include the link in the comments below (here’s a good example). If you are more of an audio/visual learner, check out The Get More Smarter Show or The Get More Smarter Podcast. And don’t forget to find us on Facebook and Twitter.

► Governors around the country — including Colorado Gov. Jared Polis — are reporting that they have had to literally hide shipments of emergency medical supplies from the federal government. As Gov. Polis told Colorado Public Radio last week:

On buying more than 100,000 COVID-19 tests from South Korea, but not announcing they’d arrived:

Republican governors in Massachusetts and Maryland have reported similar practices. Last week, Denver Mayor Michael Hancock called out Sen. Cory Gardner (R-Yuma) for not doing more to help Colorado in this regard.

Meanwhile, as Marianne Goodland reports for the publication formerly known as the Colorado Statesman, the Trump administration is pushing back on claims from Governors that medical supplies have been snatched up by the federal government.

► President Trump is trying to fire the acting inspector general at the Department of Health and Human Services because she did her job and reported on supply shortages and testing delays.

► As The Washington Post reports, President Trump is being advised on coronavirus response strategies by “experts” who don’t really know what they are talking about:

The span of 34 days between March 29, when Trump agreed to extend strict social-distancing guidelines, and this past week, when he celebrated the reopening of some states as a harbinger of economic revival, tells a story of desperation and dysfunction.

So determined was Trump to extinguish the deadly virus that he repeatedly embraced fantasy cure-alls and tuned out both the reality that the first wave has yet to significantly recede and the possibility of a potentially worse second wave in the fall.

► How’s this for irony? The coronavirus appears to have killed the “public option” — at least for now. As Jesse Paul reports for The Colorado Sun:

Democrats in the Colorado legislature announced Monday that they are setting aside their contentious effort this year to pass a bill creating a public health insurance option.

The prime backers of the legislation, House Bill 1349, say the coronavirus crisis has made it impossible to ensure that all of the relevant stakeholders — hospitals, doctors and insurance companies — can be involved in the lawmaking process.

But the Democrats pushing for the measure, which is a priority of Gov. Jared Polis, say the pandemic has highlighted the need for the public option, which was set to really be a private insurance plan that’s offered through the state with strict regulations.

While COVID-19 may have illuminated the problems with our current healthcare system, the chaos of the pandemic has made it extremely difficult for the legislature to tackle bigger issues like a public option. Last week lawmakers also announced that legislation to create a paid family leave program in Colorado was also put on hold because of coronavirus.

► The Denver Post helps explain which businesses can re-open in Colorado beginning today, with an important caveat:

The relaxed measures do not apply to counties where stay-at-home restrictions have been extended until May 8: Denver, Adams, Arapahoe, Boulder, Broomfield, Gilpin and Jefferson.

► President Trump held a televised “town hall” meeting on Fox News with a very audacious background. Addressing the coronavirus pandemic, Trump acknowledged that the death toll in the U.S. will likely exceed 100,000.

Chris Cillizza of CNN goes through some of Trump’s most ridiculous comments from Sunday:

Dr. Trump, I presume? What is, um, a “little diabetes?” Your guess is as good as mine, but if you have it, coronavirus will “take you out very strongly?”

Trump also blamed the Obama administration for not working on a vaccine for a virus that didn’t exist until late last year. “I call it the plague,” says Trump.

And then there’s this:

Lincoln was assassinated, for one thing.

► Federal aid money has been pouring into some of Colorado’s most-populous counties, as The Denver Post reports:

More than $558 million in direct federal aid flooded into five Front Range counties last month as unprecedented government spending in Washington, D.C., made its way to the Centennial State.

“We’ve never received any kind of money like this, ever,” said Jerry DiTullio, the treasurer in Jefferson County.

Now, county officials must decide how to distribute the coronavirus response money to municipalities and what to spend it on, even as Congress is considering whether to send $1 trillion more to states and municipalities nationwide.

► Colorado has seen more deaths among meatpacking plant workers related to COVID-19 than any other state.

► As The Associated Press reports, COVID-19 patients could have been in BIG trouble if not for Obamacare:

COVID-19 could have stamped a person “uninsurable” if not for the Affordable Care Act. The ban on insurers using preexisting conditions to deny coverage is a key part of the Obama-era law that the Trump administration still seeks to overturn.

Without the law, people who recovered from COVID-19 and tried to purchase an individual health insurance policy could be turned down, charged higher premiums or have follow-up care excluded from coverage. Those considered vulnerable because of conditions such as respiratory problems or early-stage diabetes would have run into a wall of insurer suspicion.

Yet as defenders of the ACA submit written arguments to the Supreme Court next week countering the latest challenge to its existence, the Trump administration remains adamant that former President Barack Obama’s health law, known as “Obamacare,” must go.

The coronavirus pandemic has also shown why Medicaid is so crucial for poor and rural communities in Colorado.

► As George Packer writes for The Atlantic, the coronavirus has revealed that the United States of America is a “failed state.”

A 53-year-old Loveland man who boasted he’d bring high-powered weapons to a protest at the Colorado Capitol against coronavirus restrictions was arrested over the weekend and faces charges after Federal Bureau of Investigation and other agents raided his home and found four pipe bombs, authorities said Sunday night.

Bunn raised concerns after he boasted on social media that he would bring high-powered weapons to a rally at the Colorado Capitol protesting coronavirus restrictions.

The former vice president was never the group’s favored candidateto take on Trump, with a February survey of its members showing that just 6 percent picked Biden among the then-crowded Democratic presidential primary field, well behind Elizabeth Warren and Bernie Sanders.

► As Ian Silverii writes for The Denver Post, now would be a really good time for Sen. Cory Gardner (R-Yuma) to use his “clout” with President Trump for the good of Colorado.

► Colorado Attorney General Phil Weiser will make arguments on Colorado’s “faithless electors” case on a teleconference with the U.S. Supreme Court next week.

► As The Nation reports:

► Tara Reade, the former Senate staffer who has alleged that she was sexually assaulted by presumptive Democratic Presidential nominee Joe Biden, acknowledged a significant hole in her accusations.

► The editorial board of The Colorado Springs Gazette continues to assert itself as the most fact-challenged opinion section in Colorado.

► As Marshall Zelinger reports for 9News, be very glad that you don’t have to make the kind of impossible decisions facing Colorado’s Joint Budget Committee.

► There’s so much evidence that I can’t even tell you any of it:

Mike Pompeo claimed this morning that there’s “enormous evidence” to support the theory that the coronavirus originated in a Wuhan lab, but didn’t elaborate on what that evidence consists of. https://t.co/4uBmIzf6dA

► If you want to move up in the Trump administration, the formula is not complicated: Just kiss President Trump’s ass at every opportunity.

► President Trump is obsessed with calling out former President Obama, and CNN’s Don Lemon is baffled:

► President Trump is absolutely, positively wrong when he claims that America’s ventilator problems are because of former President Obama.

► Don’t miss this week’s episode of The Get More Smarter Podcast, or you will be sad: