These are the pipe bombs allegedly manufactured by Bradley Bunn, per the affidavit. When an FBI agent asked to make clear he planned on using them on police in the event of a raid, he allegedly replied, “F— yes.” https://t.co/NrTHSYegAs pic.twitter.com/Dq59wmZgoN 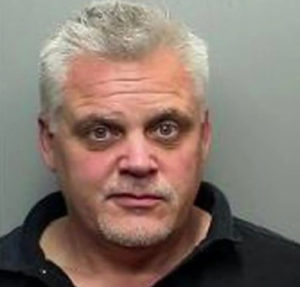 Bradley Bunn, one of life’s winners.

A 53-year-old Loveland man who boasted he’d bring high-powered weapons to a protest at the Colorado Capitol against coronavirus restrictions was arrested over the weekend and faces charges after Federal Bureau of Investigation and other agents raided his home and found four pipe bombs, authorities said Sunday night.

Bunn raised concerns after he boasted on social media that he would bring high-powered weapons to a rally at the Colorado Capitol protesting coronavirus restrictions. [Pols emphasis]

FBI and ATF agents served search warrants Friday morning at the Loveland, Colorado, home of Bradley Bunn, 53. Agents discovered four pipe bombs and potential pipe bomb components inside the house, according to a press release from the office of U.S. Attorney for Colorado Jason Dunn.

It is not clear what, if anything, Bunn planned to do with the pipe bombs, the official said.

Bunn came to the attention of law enforcement after using social media to encourage people to bring assault rifles to a planned May 1 rally at the Colorado capitol building, ABC News has learned.

In a motion to restrict some documents in the case, U.S. Attorney for Colorado Jason Dunn wrote that at the time the search warrant was executed Friday “there were concerns that Mr. Bunn was escalating to violence and that he had the means to commit violence.”

He also wrote that on Saturday night, the U.S. Department of Homeland Security issued an alert saying it had identified threats of violence toward FBI agents and local law enforcement coming from a “white supremacist extremist instant messaging group” that was claiming a “quick reaction force” was staging in Fort Collins in response to the Friday raid.

Dunn wrote that the group was “inciting followers to shoot through their doors at FBI agents and local law enforcement officers performing said raids.”

We’re watching for updates to this story in relation to Bunn’s gun rights activism before the COVID-19 pandemic, and possible connections to hard-right Republican usual suspects (figuratively speaking, for now anyway) at the Rocky Mountain Gun Owners (RMGO). But after reading the plan posted online by an alleged associate of Bunn for “freedom fighters” to show up at the Colorado state capitol building “hot, locked, and ready to rock” last Friday, we can’t claim to be surprised by any of this.

But it may be time to put a name on what’s happening in the “Reopen America” movement.

These are terrorists. This is terrorism.