Get More Smarter on Tuesday (April 21)

The Flint, Michigan water crisis began on this day in 2014. Yes, 2014. Now, let’s Get More Smarter. If you think we missed something important, please include the link in the comments below (here’s a good example). If you are more of an audio/visual learner, check out The Get More Smarter Show or The Get More Smarter Podcast. And don’t forget to find us on Facebook and Twitter.

► Governor Jared Polis on Monday outlined a path forward for Colorado to begin to return to normal life after more than a month of stay-at-home orders, though critics worry that there is still a severe shortage of coronavirus testing in our state. As Denver 7 reports:

Colorado public health officials said Monday that even once the governor begins to lift the stay-at-home order next week, strict physical distancing measures, the wearing of masks and better COVID-19 case detection and containment will be needed for months to avoid overwhelming the state’s ICU hospital beds.

Gov. Jared Polis said Monday afternoon he would allow the statewide stay-at-home order to expire Sunday, but plans keep those strict measures discussed by health officials in place as the state gradually begins to reopen through what Polis said would be “safer at home” guidance.

Polis said retail businesses could begin curbside delivery on Monday, April 27. Elective surgeries will be allowed beginning that same day. Large workplaces will be allowed to open at 50 percent capacity beginning on May 4. Polis says he hopes bars, restaurants, and clubs can reopen by mid-May but warned that more data was needed before he can make that decision.

► There are conflicting stories about the progress of another coronavirus stimulus bill in Congress. As The Washington Post reports:

Senate Minority Leader Charles E. Schumer said Tuesday that lawmakers and the White House have reached a nearly $500 billion deal to replenish a small business lending program slammed by the coronavirus and to boost spending on hospitals and testing…

…However, a Senate GOP leadership aide cautioned that a deal was close but not yet completed as it awaited final sign-off from GOP leaders. The aide spoke on the condition of anonymity to discuss private negotiations.

Democrats have been demanding that more money is included to provide relief to local governments and municipalities.

Meanwhile, The Colorado Sun breaks down Colorado’s $7.4 billion share from the first round of funding for the Paycheck Protection Program.

► We’ve mentioned before that nearly 8 in 10 Americans DO NOT AGREE with the narrative being pushed by protestors who are mad about stay-at-home orders. Now, a new poll shows that the majority of Americans believe these protestors are wrong. From Newsweek:

The latest survey by Yahoo! News and YouGov found that 60 percent of the U.S. public opposed protesters calling for an immediate end to social distancing measures and stay-at-home orders designed to protect public safety.

Less than a quarter of respondents (22 percent) said they supported the rallies calling for America to be “reopened” while a further 18 percent said they were “not sure” how they felt on the matter.

The coronavirus also disagrees with these protestors. The state of Kentucky saw a surge in coronavirus cases a few days after rallies from right-wing meatheads who are mad about stay-at-home orders.

► Remember February 20, 2020? That was the day that President Trump held a big campaign rally in Colorado Springs. If you recall, that was the event with a fantastically-awkward attempt at a hugshake by Sen. Cory Gardner (R-Yuma).

Why are we asking if you remember that Colorado Springs rally? Well, because President Trump apparently does not.

ALCINDOR: You held rallies in February and March

TRUMP: I haven’t left the White House in months

ALCINDOR: You held a rally in March

TRUMP: Did I hold a rally? I’m sorry pic.twitter.com/MPDK8lZAeD

As PEOPLE magazine explains, PBS reporter Yamiche Alcindor asked Trump about why he was still traveling the country in February and March despite his own boasts of setting travel restrictions:

“You held rallies in February and March and there are some—” Alcindor said before Trump, 73, cut the reporter off.

“I know one thing: I haven’t left the White House in months.” Actual quote from actual President of the United States of America.

BTW, Gardner certainly remembers this rally: Over the weekend he showed Republicans a video that showed every time Trump praised the Yuma Senator.

Most Americans expect no immediate easing of the health risks associated with the coronavirus pandemic, despite calls by President Trump and others to begin reopening the economy quickly. A majority say it could be June or later before it will be safe for larger gatherings to take place again, according to a Washington Post-University of Maryland poll.

Most Americans — 54 percent — give the president negative marks for his handling of the outbreak in this country and offer mixed reviews for the federal government as a whole. By contrast, 72 percent of Americans give positive ratings to the governors of their states for the way they have dealt with the crisis, with workers also rating their employers positively. 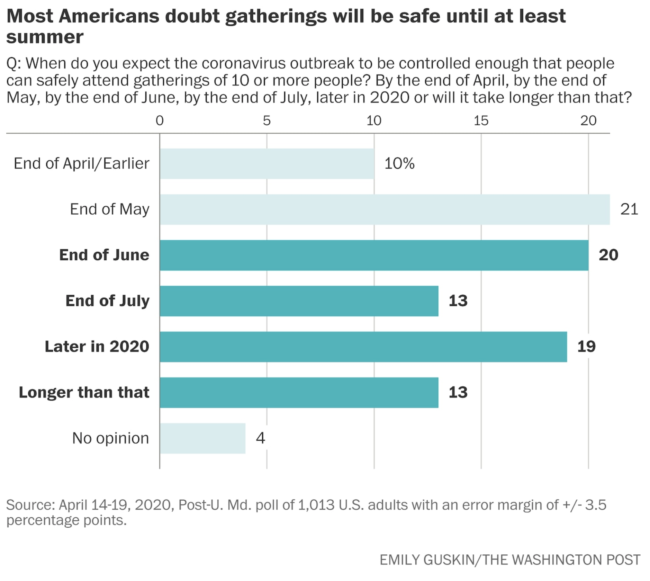 ► Republican Gov. Larry Hogan of Maryland took President Trump’s advice and sought his own solutions for coronavirus testing in his state. Naturally, President Trump then publicly criticized him.

► Coronavirus cases in Colorado are trending in the right direction at the moment.

► Contact tracing will be the key to controlling the next stage of coronavirus. John Ingold of The Colorado Sun explains how it will work in Colorado.

► The Denver Post talks with the freelance photographer who captured this now-iconic shot of nurses standing in the way of Denver protestors opposed to stay-at-home orders. 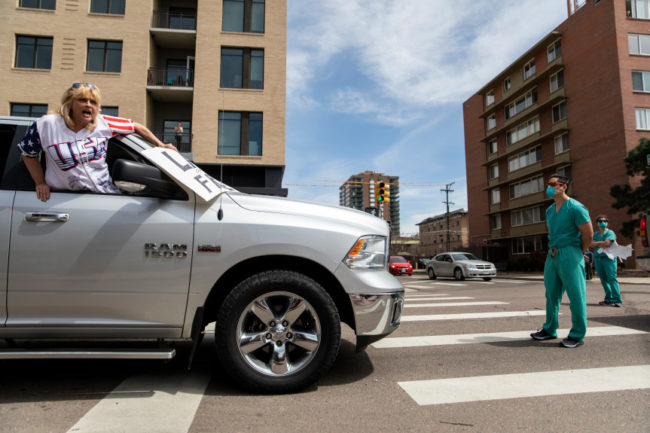 ► President Trump issued a surprise temporary ban on immigration on Monday evening. There is much confusion about what legal basis Trump is trying to use to justify this order.

► This could turn out to be one of the more important stories in the 2020 election cycle. From NBC News:

Officials have identified seven people who appear to have contracted the coronavirus through activities related to the April 7 election in Wisconsin, Milwaukee’s health commissioner said, and advocates worry it could be just the “tip of the iceberg.”

Commissioner Jeanette Kowalik said six of the cases involve Milwaukee voters and one is a Milwaukee poll worker, the Journal Sentinel reported.

Officials hope to have additional information on the cases by the end of the week, including whether any of them were concentrated in any of the city’s five polling places or if any resulted in death, Kowalik said Monday.

Republicans are openly opposing expanded mail-in balloting in 2020 because of concerns that increased voter turnout will hurt Republican candidates. But arguing against mail balloting by yelling false claims about voter fraud becomes a much weaker argument when in-person voting is literally killing people.

► For the first time, renewable energy has surpassed coal as a source of generating electricity.

► Congressman Scott Tipton (R-Cortez) began his political career as a state lawmaker, so you would think he would have a decent understanding of how Colorado’s state budget works. You would be wrong.

► You don’t want to be anywhere near an organization that would have State Rep. Lori Saine as a member.

► Senate Bill 181, an oil and gas regulation measure passed by the Colorado legislature in 2019, has long been decried as leading to the death of the O&G industry in our state. That narrative is officially, positively dead now.

► As Westword reports, Denver’s air is no good:

Denver earned another failing grade in the just-released 2020 edition of the American Lung Association’s annual State of the Air report. The report, which tracks levels of common air pollutants in hundreds of cities across the country, is the latest research to find that Denver’s air quality is trending in the wrong direction, with levels of both ozone and particle pollution higher than in the ALA’s previous report.

► Texas Lt. Gov. Dan Patrick is not exactly a fountain of logic.

► The Colorado Springs Business Journal encourages Sen. Cory Gardner (R-Yuma) to do something to stop the grift from the coronavirus stimulus money:

Since Sen. Cory Gardner seems to have the president’s ear — at least for now — he should step up and demand the White House adhere to the principles of accountability and fiscal responsibility that Republicans claim to espouse.

Gardner should call for Fine’s immediate reinstatement, emphasizing that nonpartisan watchdogs are essential to democracy.

It’s past time to push our elected officials to stand against the president’s assault on independent oversight.

► The latest episode of The Get More Smarter Podcast went live on Saturday morning. Tune in to hear hosts Jason Bane and Ian Silverii discuss the latest fundraising numbers and listen to some wacky interviews with anti-stay-at-home protestors.