Get More Smarter on Wednesday (April 15)

Hey, at least your taxes aren’t due today. Now, let’s Get More Smarter. If you think we missed something important, please include the link in the comments below (here’s a good example). If you are more of an audio/visual learner, check out The Get More Smarter Show or The Get More Smarter Podcast. And don’t forget to find us on Facebook and Twitter.

► President Trump and many Republicans still really want to open up the country around May 1. This makes scientists and health experts very nervous, as The Washington Post reports:

A draft national strategy to reopen the country in phases, developed by the Federal Emergency Management Agency and the Centers for Disease Control and Prevention, emphasizes that even a cautious and phased approach “will entail a significant risk of resurgence of the virus.”

The internal document, obtained by The Washington Post, warns of a “large rebound curve” of novel coronavirus cases if mitigation efforts are relaxed too quickly before vaccines are developed and distributed or broad community immunity is achieved…

…The framework lays out criteria that should be in place before a region can responsibly ease guidelines related to public gatherings: a “genuinely low” number of cases; a “well functioning” monitoring system capable of “promptly detecting” spikes of infections; a public health system able to react robustly to new cases and local health systems that have enough inpatient beds to rapidly scale up in the event of a surge in cases.

This would seem to necessitate ramping up testing and production of personal protective equipment at levels not currently being done.

Polls continue to show that the vast majority of Americans are not at all enthusiastic about rushing back to “normal” life. As Vox.com explains, the Trump administration is actually pretty freakin’ far from being ready for the country to reopen.

► Late Tuesday, President Trump announced that he was cutting off funding for the World Health Organization because he needs a scapegoat for his coronavirus response failures. House Democrats don’t believe that Trump can legally make this decision, but “laws” aren’t really a concern for this White House.

Trump is also holding up the distribution of stimulus checks so that the “memo” line of the checks can include the name “Donald J. Trump. No, seriously.

► Today is the filing deadline for political campaigns to report Q1 fundraising numbers.

► As The Denver Post reports, state officials are cautiously optimistic that social distancing and stay at home orders have dramatically slowed the transmission of COVID-19 in Colorado. Here’s more from Denver7 and 9News.

Meanwhile, Colorado wants the Federal Emergency Management Agency (FEMA) to cover most of the costs for the construction of temporary field hospitals in Denver and Loveland. As Colorado Public Radio reports:

The costs of the facilities are split between the states and the federal government under the federal Stafford Act. But Polis and other members of the National Governors Association think that’s an unfair expectation during an unprecedented outbreak.

“We believe that the unprecedented size, scale and duration of the COVID-19 impacts far exceed the response capabilities of the states and territories and warrants the full force and support of the federal government. Waiving the cost-share requirements will ensure that states and territories are able to adequately and rapidly respond to and support the American people,” read a letter from the NGA to President Donald Trump.

Polis has described the facilities as preparation for a worst-case scenario. They’ll hopefully see only dozens or hundreds of patients, he said. The Denver and Loveland facilities are for “Tier 3” patients who don’t need the full medical care of a hospital.

Colorado is also planning out how to respond to a potential second wave of coronavirus cases by preparing more medical facilities around the state.

Another coronavirus briefing. Another series of false claims.

Speaking Tuesday in the Rose Garden of the White House, President Donald Trump denied making a comment he did make. He criticized the World Health Organization for the same thing he has done before. He wrongly suggested he was the only national leader to impose travel restrictions on China. He claimed he was “authorizing” governors to lift coronavirus restrictions even though this power always belonged to governors. He falsely claimed, again, that “nobody ever thought” there would be a crisis like this. And he repeated some of his favorite false claims about his tariffs on China.

It’s probably fair to say that CNN has had enough of Trump’s crap. We are all CNN.

► You can buy a whole lotta gas right now for not a lot of money. Too bad you can’t go anywhere. According to a press release from AAA Colorado:

The national gas price average has continued its precipitous decline into another week as it hits $1.85 today. In Colorado, the statewide average for a gallon of regular unleaded sits at $1.82 – down 84 cents from this time last year. Since late February, U.S. demand for gasoline has decreased 44 percent to 5 million barrels per day, with gasoline inventories building across the country.

“The bottom line is that we’re living through the lowest domestic demand for gasoline since 1968,” said AAA Colorado spokesman Skyler McKinley. “That means cheap gas prices now – and further declines for the foreseeable future.”

This is the part where we remind you that none of this has anything to do with SB-181. 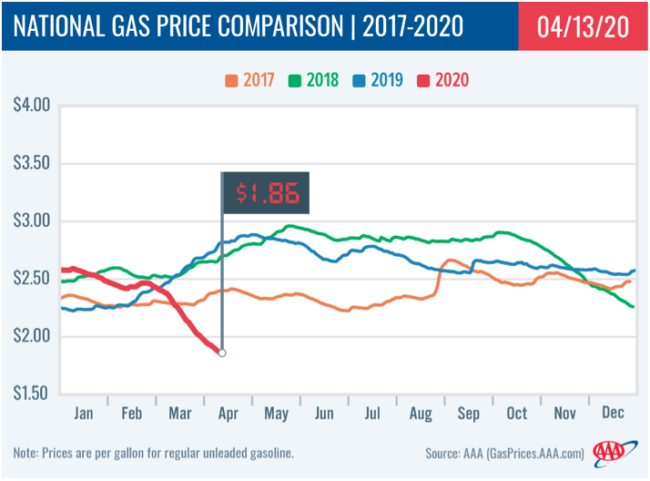 ► Immigration activists are citing coronavirus concerns in pushing for the release of 14 people currently in an ICE detention facility in Aurora.

► As Marshall Zelinger reports for 9News, airports around Colorado will share a big chunk of change from the federal government to help them get through a drop in passenger traffic of 90-95%. Of the $367 million being appropriated to Colorado airports, the biggest chunk — $269 million — will go to Denver International Airport.

► Health officials are checking on another potential coronavirus outbreak at a Colorado meatpacking plant.

► The City of Boulder announced plans to furlough 737 municipal employees. The City of Denver is considering similar measures as revenue figures plummet.

► You can thank the coronavirus for a (perhaps temporary) change allowing for online marijuana sales.

► As Denver7 reports, the Paycheck Protection Program is paying out big money in Colorado:

The U.S. Small Business Administration (SBA) said that as of Monday, 28,469 Paycheck Protection Program loans had been approved for qualifying businesses in the state of Colorado for a total of $5,830,781,842…

…Nationally, 1,035,086 loans have been approved for small businesses, nonprofits and other organizations under the Paycheck Protection Program totaling more than $247 billion, the SBA said.

The PPP, part of the federal CARES Act signed into law on March 27, provides nearly $350 billion to help cover payroll for small businesses and income for self-employed workers who have lost their jobs amid the coronavirus crisis.

► As The Denver Post reports, Gov. Jared Polis is getting help from a handful of software engineers as the state tries to keep an accurate track of coronavirus cases.

► So far, so good in Colorado’s state-run veteran’s facilities.

► Colorado mountain communities have been particularly hard-hit by the surge in unemployment filings.

► As Jennifer Brown writes for The Colorado Sun, the coronavirus outbreak is making a lot of people realize that paid family leave is a pretty good idea. Republicans such as Senate Minority Leader Chris Holbert are just shrugging it all off.

► As The New York Times reports, the coronavirus outbreak has been really, really, REALLY bad for retail businesses.

► According to a press release from the campaign of James Iacino, the first-time candidate won top line through the CO-3 congressional assembly over fellow Democrat Diane Mitsch Bush.

► Democrat Trish Zornio is officially ending her campaign for U.S. Senate. The little-known Zornio started running for the 2020 Democratic nomination way back in 2018 but never gained any traction. Zornio is ending her campaign now because she says the coronavirus outbreak has made it impossible for her to compete for 30% of the vote with the state Democratic convention coming up on Saturday (candidates need at least 30% of the vote to qualify for the June Primary ballot).

With Zornio out and former Gov. John Hickenlooper already qualified for the Primary ballot (via petition), that leaves Andrew Romanoff and Stephany Rose Spaulding to compete for ballot access via the assembly process this weekend. Michelle Ferrigno Warren and Diana Bray failed to submit enough signatures to qualify for the Primary ballot, though both are still “official” candidates. Lorena Garcia is still waiting for word on whether she gathered the required number of valid signatures for June.

► Vice President Mike Pence will be in Colorado Springs on Saturday to deliver the commencement address for the Air Force Academy. Pence was originally slated to deliver his address via video, because of coronavirus and all.

► Former House Speaker Dickey Lee Hullinghorst pens an Op-Ed for The Denver Post about how the 2009 recovery from a recession could have been different if Republicans had supported then-President Obama in the same manner that they now support President Trump.

► White House adviser Kellyanne Conway apparently thinks that “COVID-19” means that there were 18 other “COVIDs” before this one. Pro tip: “19” refers to 2019, because the outbreak began in China late last year.

► Illinois Gov. J.B. Pritzker admits that he has given up on waiting for coronavirus help from the federal government.