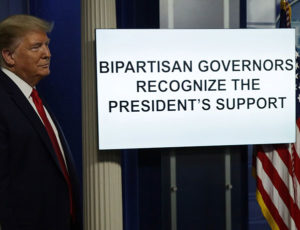 On Monday, President Trump held a 2 1/2 hour coronavirus briefing that was mostly about self-congratulation and media bashing. As Ashley Parker writes for The Washington Post:

Yet in the middle of this deadly pandemic that shows no obvious signs of abating, the president made clear that the paramount concern for Trump is Trump — his self-image, his media coverage, his supplicants and his opponents, both real and imagined.

“Everything we did was right,” Trump said, during a sometimes hostile 2½ -hour news conference in which he offered a live version of an enemies list, brooking no criticism and repeatedly snapping at reporters who dared to challenge his version of events.

Trump has always had a me-me-me ethos, an uncanny ability to insert himself into the center of just about any situation. But Monday’s coronavirus briefing offered a particularly stark portrait of a president seeming unable to grasp the magnitude of the crisis — and saying little to address the suffering across the country he was elected to lead.

At one point — after praising himself for implementing travel restrictions on China at the end of January and griping about being “brutalized” by the press — Trump paused to boast with a half-smirk, “But I guess I’m doing okay because, to the best of my knowledge, I’m the president of the United States, despite the things that are said.”  [Pols emphasis]

Anyway, we took one look at the photo above and realized that this was another perfect opportunity for a “caption this” contest. We did some light editing of that photo to give you a blank canvas. Enjoy! 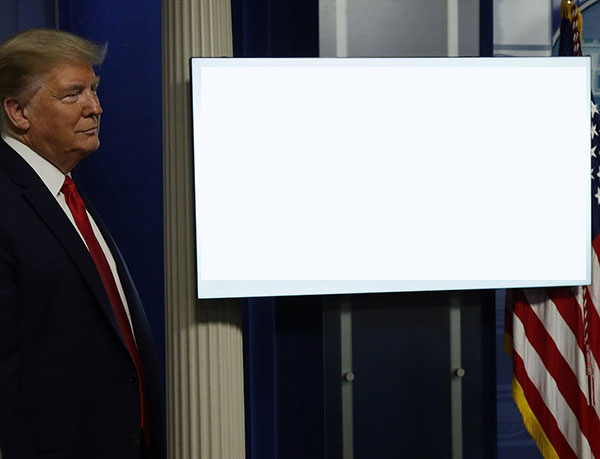