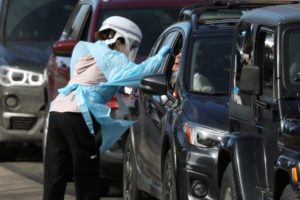 “UCHealth has been at the forefront of serving our community since the first cases of COVID were diagnosed in El Paso County,” Media Relations Specialist Cary Vogrin said via email. “We are committed to continuing the operations of the testing site off South Parkside Drive with or without federal support, so long as our supplies enable us to do so.”

But late yesterday, the word went out as Politico reports that the feds would not pull back support from what’s considered a vital resource to make controversially limited COVID-19 tests available:

[A]n HHS spokesperson told POLITICO the federal government will continue to operate the sites if governors request such assistance — and said that the agency would not hold states to the deadline listed in a FEMA memo: 5 p.m. today. [Pols emphasis]

Giroir said that some states have already chosen to take over testing sites. Others — including Colorado, Illinois, Louisiana, New Jersey and Texas — have asked for continued federal support, Vice President Mike Pence said Thursday night at a White House briefing.

What happened between yesterday morning when FEMA had decided to pull out of the drive-through testing program and yesterday evening when FEMA did an about-face? We assume it involved some animated discussions from vulnerable Republicans whose states would be affected by this decision. We can speculate, but no matter who convinced them to change course at the last moment this is another example of arbitrary and capricious management of the pandemic by the Trump administration. Much like the co-opting of 500 ventilators Colorado tried to buy a week ago by competing federal buyers, there are clearly major gaps in communication between officials who are supposed to be working together.

And it’s consistent with a theme: of states like ours scrambling to mitigate federal incompetence.