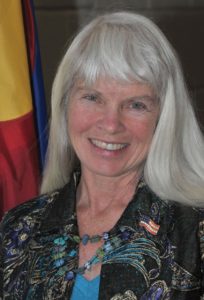 A press release a short while ago from the congressional campaign of former state Rep. Diane Mitsch Bush in CD-3 announces a substantially bigger than expected fundraising haul for the first quarter of the 2020 election year:

In the first fundraising quarter of 2020, Diane Mitsch Bush, Democratic candidate running to unseat incumbent Scott Tipton, raised $363,000 from more than 1,338 donors in Colorado alone. This is the largest amount raised by a candidate for the seat so far this cycle by a large margin.

This figure brings her overall fundraising total for the 2020 Election Cycle to more than $789,000 from 7,110 donations with almost three-quarters coming from Coloradans–with $478,000 cash on hand…

“My contributions come from hardworking people who are deeply concerned by the current crisis and are tired of Tipton working for Washington insiders, pharmaceutical companies, and not holding this current administration accountable.”

“Scott Tipton has put corporations and party politics over people time and time again. He voted against protections for more than 300,000 Coloradans with preexisting conditions, voted to cut Medicare and Social Security, voted against veteran benefits, and against protections for our public lands. This crisis shows that we need better leadership in Washington. I have a record of bringing people together and getting things done for the people of CD3 when it really matters. I’ll do the same in Congress.”

In recent weeks the conversation about the upcoming race to unseat incumbent GOP Rep. Scott Tipton has mostly been about Democrat James Iacino–a wealthy businessman who although capable of self-funding a congressional campaign posted strong bonafide funds raised in Q4 2019, and has been racking up the endorsements. In 2018, former Rep. Mitsch Bush lost to Tipton, although by a smaller margin than some of Tipton’s previous Democratic opponents in less favorable years. CD-3 rates R+6 on the Cook PVI Index, in practical terms the only “reach goal” left for Colorado Democrats who would like to grow the state’s 4-3 Democratic delegation majority to 5-2 ahead of redistricting in 2021.

With this strong performance, Mitsch Bush looks to make the Democratic primary a real race. And that’s good: Rep. Tipton may not be what you’d call an inspiring leader, but he’s proven to be a very durable GOP incumbent. Supporters of both Democratic candidates should welcome the chance to hone their skills for the main event.