THURSDAY UPDATE: As 9News reports, Douglas County Commissioner Abe Laydon is not the dumb one of the bunch:

While the Douglas County Commissioners are politically aligned with the Republican lawmakers, not all of them agree. Republican Commissioner Abe Laydon supported Tri-County’s mandate.

“Now is not the time to politicize a pandemic,” he told 9NEWS.

Laydon said his focus will be on working within the parameters of an order to keep people and businesses safe.

“Where I stand is — do everything we can do to make sure that hospitals, doctors, nurses, first responders, senior citizens are not decimated by what we’re hearing,” he said. 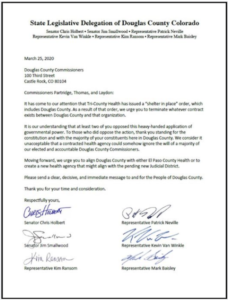 As Denver7 first reported today, Republican lawmakers from Douglas County are hopping mad about a new “stay at home” order implemented by the Tri-County Health Department, which covers Adams, Arapahoe, and Douglas Counties. A similar order has also been issued in Boulder and Jefferson counties.

It has come to our attention that Tri-County Health has issued a “shelter in place” order, which includes Douglas County. As a result of that order, we urge you to terminate whatever contract exists between Douglas County and that organization.

It is our understanding that at least two of you opposed this heavy-handed application of governmental power. To those who did oppose the action, thank you for standing with the constitution and with the majority of your constituents here in Douglas County. We consider it unacceptable that a contracted health agency could somehow ignore the will of a majority of our elected and accountable Douglas County Commissioners.

Sigh. Where to begin?

First off, this is more than just Douglas County Republican lawmakers screeching at one another; Chris Holbert is the Senate Minority Leader, and Patrick Neville is the House Minority Leader, so they are effectively speaking for the entire GOP caucus here. Their message is simple: If health experts don’t do what non-expert elected officials tell them to do, then we should fire them.

We’re also perplexed that Sen. Jim Smallwood would sign his name here. Smallwood recently tested positive for coronavirus and is currently living at his second home in California. He’s not even IN Colorado at the moment, so how can he make this judgment? 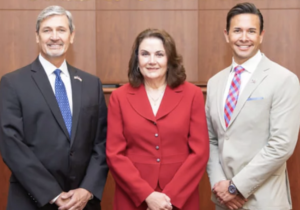 More importantly, the Douglas County Board of County Commissioners (BCC) is represented by three Republicans, none of whom are qualified to make public health decisions of this magnitude. Here’s the official biography for Abe Laydon, who was elected to the BCC in 2018:

Prior to being elected as County Commissioner, Laydon served as a Douglas County Planning Commissioner for two terms, and as the Douglas County Republican Party’s first vice-chairman and treasurer. A graduate of the Leadership Program of the Rockies, Laydon has been involved in philanthropy and civic service his entire life. He sits on the board of many local nonprofits, was an officer and member of Denver Active 20-30 and the Metro Denver Board of Christian Legal Society.

Yeah, let’s put that guy in charge during a global pandemic. Roger Partridge previously owned a physical therapy business, and Lora Thomas is a former trooper with the State Patrol who served as the elected Coroner of Douglas County from 2011-15. 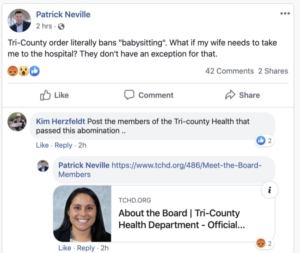 Laydon, Patridge, and Thomas may be very nice people, but none of them are public health experts. In fact, we’re guessing that Douglas County contracts with the Tri-County Health Department in part because they don’t already have a bunch of public health experts roaming the building.

Oh, and to make matters worse, Rep. Neville also appears to be doxxing members of the Tri-County Health Department (see image at right), including the wife of State Rep. Kyle Mullica; you should know that Kyle Mullica is a trauma nurse working on the front lines of the coronavirus outbreak, and Julie Mullica is the Systems Director for Infection Prevention at SCL Health.

Finally, it’s important to note that this letter from Republican lawmakers doesn’t provide any sort of alternative suggestion for how to handle the coronavirus outbreak in Douglas County. Holbert, Neville and friends aren’t for anything — they’re just against this for reasons they don’t even bother to explain.

We could go on and on about how irresponsible and shameful it is for a group of elected leaders to be publicly questioning a literal life-or-death health decision in the middle of a global pandemic, but the insidiousness of this letter speaks for itself.