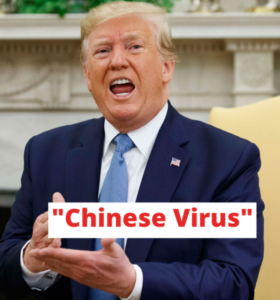 Why is China unhappy, you ask?

Via the Colorado Springs Gazette’s daily blog on political updates regarding the COVID-19 pandemic, we’re alerted that Sen. Cory Gardner of Colorado is vexed, vexed mind you, about far-fetched suggestions by diplomats from the People’s Republic of China pinning responsibility for the outbreak on the United States:

U.S. Sen. Cory Gardner and two fellow Republican members of the Senate Foreign Relations Committee on Monday called on President Donald Trump to establish a task force to counter the Chinese Communist Party’s “malicious propaganda” about the origins of the novel coronavirus…

Gardner, joined by U.S. Sen. Marco Rubio of Florida and Mitt Romney of Utah, call it “critical that our country fight back against this propaganda” in the letter, which requests the Trump “formulate a coordinated, (U.S. government)-wide response” under the direction of the National Security Council.

Now that COVID-19 has spread rapidly around the globe, the CCP and its officials have the audacity to spread disingenuous claims that the United States is responsible for this pandemic. This is not simply dishonest, it is dangerous. This tactic, in addition to being a despicable exploitation of a global emergency, threatens to undermine the worldwide coordination necessary to combat this coronavirus. It is for this reason that we request an interagency taskforce within the NSC to counter the malicious propaganda coming from CCP apparatchiks.

No responsible Western observer would ever accuse the PRC of being realistic with their frequently bellicose propaganda and sometimes outlandish suggestions about American actions and intentions. The public statements of press briefing-level Chinese diplomats are probably one step above the North Korean media or “Baghdad Bob” level of credibility, apparently a bit more so if you’re affiliated in the National Basketball Association. But it’s not the sort of allegation we either take seriously or would expect to be taken as such in serious conversation.

But you know what would help Gardner credibly complain about discreditable allegations from China?

A single word of criticism for the President who won’t stop calling it the “Chinese Virus.”

“This virus did come from China. I think China did some horrible things when they lied about this happening…”

And with that, gentle readers, the diplomacy of outrage is back to square one.