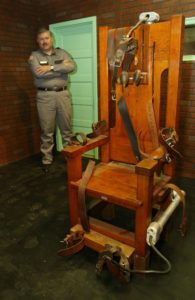 The governor’s clemency orders, which reference the three men by their Department of Corrections ID number rather than by name, was in part based on Colorado’s new law repealing capital punishment.

“The commutations of these despicable and guilty individuals are consistent with the abolition of the death penalty in the State of Colorado,” Polis said.

But Polis also recognized that the death penalty reflects a long-standing bias in the criminal justice system that disproportionately punishes people of color. There are 539 convicts in Colorado who could have been sentenced to death, lawyers say. Only three have been. All three are black men. All went to Overland High in Aurora. And all were prosecuted in the 18th Judicial District, currently represented by District Attorney George Brauchler.

Monday’s order, Polis said, is “consistent with the recognition that the death penalty cannot be, and never has been, administered equitably in the State of Colorado.”

The debate over repealing the death penalty in the Colorado legislature was very dramatic this year as in prior years, and neither support nor opposition for repeal broke cleanly along partisan lines. A few Republicans voicing religious and libertarian objections to state-sanctioned killing were opposed by a few Democratic representatives whose lives have been permanently impacted by the commission of capital crimes–including by some of the very same murderers whose death sentences were commuted yesterday.

With that said, the state has been on course to eliminate the death penalty for years, going back to Gov. John Hickenlooper’s stay of execution for an inmate set to die in 2013. The high-profile failure by politically vociferous DA George Brauchler in the death penalty phase of the Aurora shooting trial was another watershed moment, demonstrating how the death penalty doesn’t work consistently even for the worst of crimes.

Given the personal nature of this debate to certain lawmakers in the Democratic majority, getting to this point was understandably difficult. But in a broader political context, the abolition of the death penalty is less risky in the long term for majority Democrats than allowing the debate over doing so to go on indefinitely.

And now for Gov. Polis it’s another campaign promise kept.