Happening: A Bipartisan End To The Death Penalty 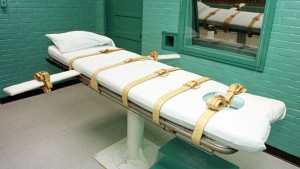 Colorado lawmakers on Tuesday introduced their much-anticipated bill to repeal the state’s death penalty – the sixth time such a bill has been introduced in recent years.

SB20-100 , if passed as introduced , would take the death penalty off the table as an option for prosecutors when they take a class 1 felony case to trial – but that would only apply to suspected criminals charged by prosecutors after July 1, 2020…

…[T]his year’s measure also has Republican sponsors and cosponsors, which could help push it over the edge in the Senate, where Democrats hold a 19-16 majority but are expected to see one senator go on maternity leave soon and another seat have to be filled in the wake of the retirement of Sen. Lois Court. The measure is almost certain to pass the Democrat-heavy House.

Democrats looking to repeal Colorado’s death penalty have long had a friend in Sen. Kevin Priola, a Catholic whose opposition to the death penalty for years was the lone exception to a wall of Republican support. This year, two additional Republicans, Sens. Jack Tate and Owen Hill, have padded the margin needed to get the bill out of the Senate and on to Gov. Jared Polis’ waiting desk.

Previous attempts to legislative repeal the capital punishment in Colorado have failed for different reasons. In 2013, an historic progressive legislative session encountered fierce Republican backlash which ultimately led to recalls against Democratic Senators, and at least partly because Democrats had achieved so much that year, it was determined politically necessary to hold off. In 2019, the dissent of one Democrat, Sen. Rhonda Fields of Aurora, resulted in a standoff in the upper chamber that ended when sponsors pulled the bill late in the session.

Although repeal of the death penalty for future cases seems assured this year with this new infusion of bipartisan support, a word of respect for Sen. Fields is called for as this long struggle heads for its inevitable conclusion. Two the three men currently on death row in this state are there for the murder of Sen. Fields’ son in 2005. We of course have not been party to every discussion about this legislation, but it’s been suggested that Sen. Fields has been treated insensitively by some of her colleagues over the years for her difference of opinion on the issue–a difference that no one can fault Sen. Fields for having after her own tragic experience.

The decline of capital punishment is nevertheless a global trend, and increasingly the choice of Americans in recent years as the cost, process, and stigma of judicially sanctioned killing has combined to make it basically unworkable. Colorado’s move to end capital punishment is mostly symbolic given the extreme rarity of its application, but it’s also consistent with the growing consensus that it’s not appropriate as a society to kill people.