Get More Smarter on Monday (March 16) 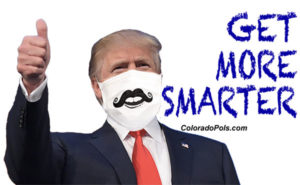 If you need a new playlist of songs, here are some timely suggestions from readers of Colorado Pols. It’s time to Get More Smarter. If you think we missed something important, please include the link in the comments below (here’s a good example). If you are more of an audio/visual learner, check out The Get More Smarter Show or The Get More Smarter Podcast. And don’t forget to find us on Facebook and Twitter.

* For the latest Colorado-related Coronavirus information, go to this website from the Colorado Department of Public Health and Environment.

► The Coronavirus is totally no big deal if you live inside President Trump’s big orange melon. As Chris Cillizza explains for CNN:

While Trump creating his own set of facts — in which he is always the best, always the winner, always the hero of the story — isn’t new, the stakes here are radically different. Now is not a time for happy talk. Now is a time for buckling down, for staying home, for understanding that this virus isn’t something we have ever experienced as a society before.

When the President of the United States gets up in front of the American people and talks the way Trump talked on Sunday, it sends the wrong signal to people. And that wrong signal encourages behavior that is detrimental to slowing the spread of the virus, which we know is vital if we want to protect ourselves.

Greg Sargent of The Washington Post takes this argument a step further in the context of Trump’s “fake news” narrative:

It’s bad enough that President Trump has relentlessly minimized the coronavirus threat for nakedly political reasons, disastrously hampering the federal government response to the crisis, with untold consequences to come.

Determined not to be outdone by his own malice and depravity, Trump is taking new steps that threaten to make all of it worse. He’s telling millions of Americans to entirely shut out any and all correctives to his falsehoods. He’s insisting they must plug their ears to any criticism designed to hold his government accountable for the failures we’re seeing, even though such criticism could nudge the response in a more constructive direction…

…But also note Trump’s declaration that, in a larger sense, the media is not being truthful at a time of crisis. Trump is using his megaphone to tell the American people not to trust an institution they must rely on for information amid an ongoing public health emergency, all because that institution held him accountable for his own failures on this front.

David Leonhardt of The New York Times is keeping track of President Trump’s bag of lies regarding Coronavirus. ICYMI on Friday, Trump definitively stated that “I don’t take responsibility at all” for botching the federal government response to the Coronavirus:

“I don’t take responsibility at all.”

The Trump presidency in one sentence. pic.twitter.com/BgiAtrDtrn

► The stock market is not responding well to the Federal Reserve’s decision to drop interest rates to zero.

► Tuesday is another big day in the Democratic Presidential Primary, but Coronavirus is changing some voting equations. From The Washington Post:

Voters, campaigns and election officials in four states holding contests Tuesday are braced for a presidential primary day unlike any in memory, as the surging threat of the novel coronavirus has forced major changes at voting locations, rattled poll workers and left voters worried about how to cast their ballots.

In Arizona, Florida, Illinois and Ohio, election officials have raced to replace poll workers who have said they will not show Tuesday, supply thousands of precincts with sanitizing supplies, and notify voters whose polling locations, many in senior facilities, have been moved as a result of the pandemic.

Voters, meanwhile, have flooded information hotlines. Among their urgent questions: where to vote, how to deliver a ballot if they are under quarantine and how to vote if they registered while attending a college that is now closed.

As the coronavirus spreads, the Democratic Party of Puerto Rico announced Sunday that it would seek to postpone the territory’s March 29 primaries, joining Louisiana and Georgia. One New York election official said Sunday that discussions are underway about whether to delay that state’s contests.

Bernie Sanders is suggesting that perhaps we should postpone all remaining Primary elections.

► The Colorado General Assembly has suspended work until March 30. House Majority Leader Alec Garnett discussed preparations for such a move in last week’s episode of The Get More Smarter Podcast.

► The Denver Post has the latest facts and figures on Coronavirus in Colorado, including a special warning for high country residents and others who have recently visited mountain communities. Denver Mayor Michael Hancock updated the city’s Coronavirus response, which includes closing down restaurant dining areas.

► The Colorado State Capitol is closed for a few days for a deep cleaning. According to a press release from the office of Governor Jared Polis:

The Colorado state capitol will be temporarily closed to the public from Monday, March 16 until Wednesday, March 18 for cleaning. State Capitol custodial crews will be cleaning all areas as per CDPHE and CDC guidelines. Restrooms, stairwells, brass surfaces, doorknobs, recycle bins and benches are disinfected several times a day during the legislative session. Additionally, while the State Capitol is closed, there will be additional cleaning of highly utilized flat surfaces.

Staff and members of the media will be allowed in the building during this time.

► Six of Colorado’s seven U.S. House Members voted to approve another Coronavirus response bill. Guess who voted “NO”? From The Denver Post:

He was Colorado’s only House member — and one of only 40 in the chamber — to vote against the measure, which would deliver $50 billion toward paid sick leave, free virus testing and enhanced unemployment benefits.

Buck, a Windsor Republican and chair of the Colorado Republican Party, tweeted late Friday night that “Nancy Pelosi squandered days trying to push wishlist items on us rather than engaging in a meaningful bipartisan discussion. This bill is a 110-page, multi-billion dollar boondoggle shoved on us at the stroke of midnight.”

The House of Representatives has now passed two separate bills for Coronavirus response. Buck has voted against both of them (he was one of only two House Members to oppose the first bill).

► As Politico reports, the Coronavirus legislation approved by the House late last week isn’t yet ready for Senate debate:

House sources said Monday that “major differences” remained between the White House and House Democrats over what was adopted and needed to be changed. This is slowing down the time table for House completion of the bill and sending it onto the Senate.

Pelosi and administration officials still remain hopeful they can achieve a workable compromise, but were tight lipped about the state of play on Monday.

The House passed its emergency package early Saturday morning but needs to make some technical corrections.

► Jeff Kottkamp, a former Republican Lt. Gov. of Florida, got his ass handed to him over the weekend after complaining about the closing of Colorado ski resorts.

► Coronavirus has created a new illness in the MAGA movement.

Joe Biden and Bernie Sanders had the debate to themselves Sunday night, but a new interloper — coronavirus — took center stage from the start.

The debate over how to address the pandemic neatly highlighted the cores of both campaigns: Biden touted his experience and contended that he is best able to unify the country to take action, while Sanders argued that the virus has illuminated severe deficiencies in the American economy and social safety net that only his “political revolution” can fix.

But the two-hour contest quickly expanded to take in other territory as well. Sanders tore at Biden’s long Senate record — including past positions on abortion and the Iraq War — in an effort to change the tide of the Democratic presidential primary, which has seen Biden build up a delegate lead this month. And Biden criticized Sanders’ past gun votes and his statements on Cuba and other authoritarian governments.

The biggest news of the debate might have been Joe Biden’s promise to select a woman to be his running mate and Vice President.

Check out these debate recaps and Winners/Losers lists from The Washington Post; Vox.com; The New York Times; NPR; The Hill newspaper; CNN; and Politico.

► State officials are not optimistic about Colorado’s budget forecast.

► Colorado Public Radio reports on legislation that would drastically improve how Colorado measures its air quality.

► Activists pushing for a 22-week abortion ban in Colorado don’t appear to be very confident that they collected enough signatures to access the ballot in November.

► Commerce City Mayor Ben Huseman is very sorry for getting piss-drunk during a recent city-sponsored visit to Washington D.C. 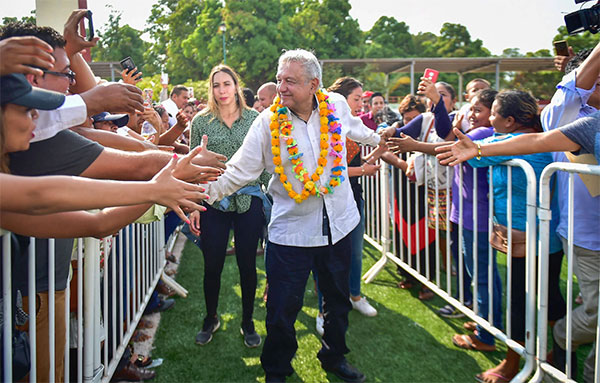 ► The League of Conservation Voters released its environmental scorecard for Colorado’s congressional delegation. Republican Reps. Scott Tipton and Doug Lamborn received a score of 7%, while GOP Rep. Ken Buck was the only member in Colorado to tally a big fat ZERO.

► Fill in the blanks.