Thousands March In Denver To Take Away Abortion Rights 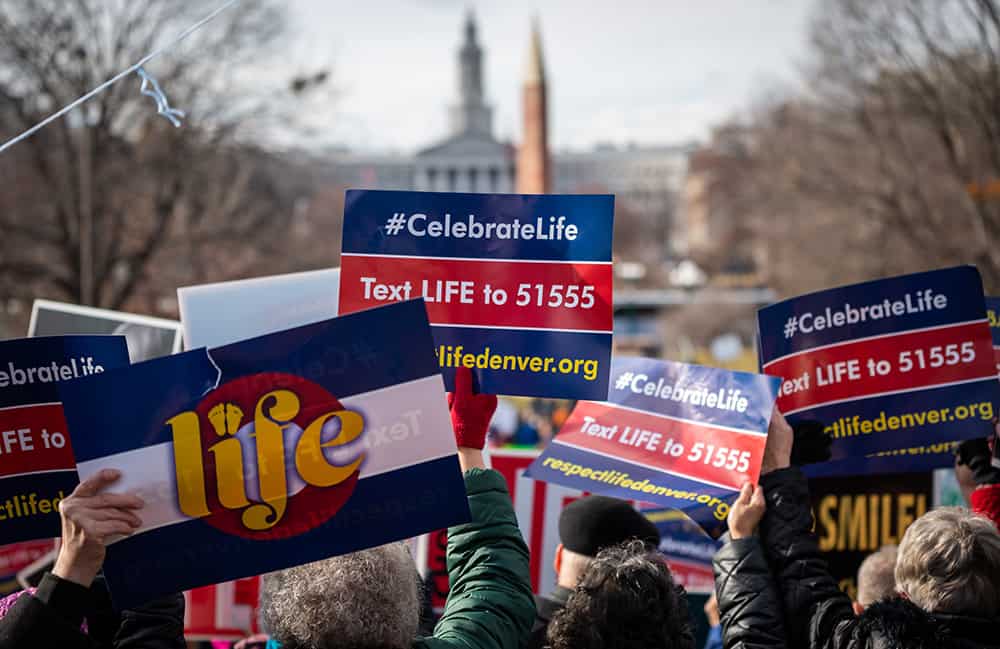 Colorado Public Radio’s Hayley Sanchez reports from the Colorado Capitol yesterday, where thousands of newly-energized religious conservative voters turned out to support ending abortion rights in Colorado–and freely acknowledging that a 22-week abortion ban headed for the ballot this year is a step toward their goal of completely banning abortion:

Thousands of abortion opponents rallied outside the Colorado state Capitol on Saturday afternoon for the “2020 Celebrate Life Rally.”

The gathering is an annual event, but this year it had a new focus — speakers and attendees repeatedly touted Initiative 120, which would ban on abortions in Colorado after 22 weeks of pregnancy. Initiative supporters must turn in 124,632 valid signatures by March 4 in order to qualify for the November ballot.

“We are not going to rest because what started in Colorado will end in Colorado,” said David Bereit, co-founder of 40 Days For Life, a Christian non-profit that campaigns against abortion. “Colorado has tried other ballot initiatives on the pro-life side in the past that have failed. This is the one that a large majority of people agree upon.”

By all accounts the crowd yesterday at the state capitol dwarfed a protest last Wednesday attended by “anti-vaxx” activists and a color-coded range of other fringe issues, cheered on by House Republican leadership. Boosted by reported heavy promotion at area churches, yesterday’s March for Life was probably the largest protest event organized by conservatives in Colorado at least since the “Tea Party” protests of 2009. It’s widely expected that Initiative 120 will qualify for the ballot, largely on the strength of petitions circulated on church property during worship services.

This large protest march takes place against the backdrop of rapidly eroding abortion rights nationwide, and an anti-abortion movement in direct pursuit of the repeal of the landmark Roe v. Wade Supreme Court decision guaranteeing abortion rights–and with a court now tilted to the right for a generation, their chances are better than ever. Colorado, on the other hand, has routinely rejected abortion ban ballot measures by overwhelmingly numbers in previous elections, clearly demonstrating majority support for safe and legal abortion.

The truth is that abortions later in pregnancy are almost always the result of severe complications and developmental problems that only become apparent later. This reality is a potent counterargument to the 22-week abortion ban in polling, and it changes undecided voters’ minds once properly explained. And once Colorado voters realize that this arbitrary, unscientific limit on abortion rights is meant to lead directly to the next step of banning all abortion, it’s likely they will reject this measure at the polls by a large margin.

With that said, it’s a good bet the religious right in Colorado is going to try harder this year than ever before. Because they realize, as supporters of abortion rights already understand, that the worst-case scenario is only one election away. If there ever was room for complacency on the left with this defining civil rights issue, there isn’t now.