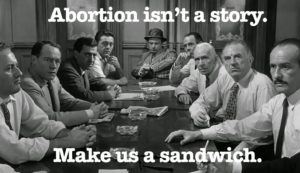 The Colorado Sun’s John Frank wrote a story yesterday we’ve been waiting to see from a Colorado politics press corps for some time: an honest look at the stridently anti-abortion agenda of Colorado Republicans, who propose every year legislation as and even more restrictive than the near-total ban on abortions signed into law in Alabama last week:

Earlier this year, with less fanfare, Colorado lawmakers debated a bill to ban elective abortions that appears more severe than the controversial new limits approved in other states…

“We are never as far from those other states as we think we are. It’s only one election,” said Karen Middleton, the executive director at NARAL Pro-Choice Colorado, an abortion rights organization. [Pols emphasis]

The last 15 years of Democratic dominance in Colorado, a period in which statewide ballot measures to ban abortion were defeated by the voters repeatedly, put anti-abortion Republicans on the defensive in this state–leading to arguably the low point of the movement’s influence in 2014, when Cory Gardner messily backtracked on the issue in an attempt to muddy his own record to compete in a statewide election. Since winning his Senate seat, of course, Gardner has voted to ban abortion every chance he got, making fools of his 2014 apologists on the issue and adding to Gardner’s 2020 vulnerabilities.

The result of all these developments, from Democratic control at the state legislative level to the supposed invulnerability of Roe v. Wade to direct challenge in the Supreme Court, was a climate of complacency in Colorado politics on the issue of abortion. Republicans introduced Alabama-style abortion ban bills year after year, and attempts by local reproductive choice advocates to sound the alarm were sometimes rudely blown off by the political press corps in Colorado. For Republicans this was an ideal situation, since they could please their religious conservative base with abortion ban bills without the awareness of their actions by the general voting public that could hurt them in the next general election.

When the entire pundit and journalist class in Colorado turned on Mark Udall in 2014 for “obsessing” about abortion in response to Gardner’s wholesale deception, this complacency over an issue still central to the GOP’s agenda claimed its greatest victim. It took the election of Donald Trump and the solidification of a conservative majority on the U.S. Supreme Court to bring the immediate threat to abortion rights into focus. If the electorate (not to mention the fourth estate) had understood that within 5 years of the 2014 election we would be discussing not just the possibility but the likelihood that Roe v. Wade will be overturned, would Gardner have still eked out his 1.9% victory over Udall?

Perhaps the only good thing that can be said, now that 2014’s deception is plain to everyone and no one can deny the threat to abortion rights that exists today, is that Colorado voters will find it hard to be complacent about abortion in future elections. Gardner and the Supreme Court Justices he helped install paved the way for the overturning of Roe v. Wade just as his opponents in 2014 warned to deaf ears. Without Roe, abortion rights in Colorado like every state are truly just one election from disaster.

Fail to vote accordingly at your peril.