Because What 2020 Really Needs Is A Good War

UPDATE: As the Denver Post reports, Sen. Michael Bennet of Colorado is not mincing words:

“And I think you couldn’t be more naive to believe that this was going to result somehow in Iran coming to the negotiating table, rather than creating the potential for another war — which is the last thing we need in the Middle East,” Bennet added. He called Trump “the weakest foreign policy president we’ve had in my lifetime,” which began in 1964.

CNN reports on the news everyone on the planet with access to news is talking about:

President Donald Trump’s targeted killing of Iran’s ruthless intelligence chief adds up to his most dangerous gamble yet with other peoples’ lives and his own political fate.

By killing Qasem Soleimani in Iraq, Trump committed the United States to a risky open conflict that at best could stop short of all-out war with Iran that could cause national security and economic shocks in the United States and across the globe.

Starting right now, and given Iran’s easy access to soft targets, the Middle East and even Europe suddenly look a lot less safe for Americans, including US troops Trump may be even more tempted to haul home. 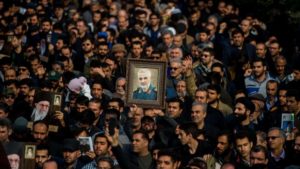 Al Jazeera reports from Tehran that the killing of the Islamic Republic of Iran’s second most-powerful leader has a nation already given over to bellicose rhetoric talking flat-out war:

Iranian President Hassan Rouhani echoed the threat of revenge and vowed that there would be consequences. Foreign Minister Javad Zarif condemned the killing as an “act of state terrorism” in a statement.

“The pure blood of Qassem Soleimani will surely strengthen the tree of resistance, unite the Iranian people, and make US policies in the region less effective by the day,” he said.

Iran’s National Security Council has convened an emergency meeting to decide Iran’s reaction to the killing. Reports say Khamenei has participated in the meeting for the first time ever, denoting the gravity of the situation.

One of the first reactions one can count on following a high-profile military action taken by the President without the prior approval of Congress is a protest, well-founded but routinely ignored, that at least top congressional leadership should be consulted before committing the nation to military action. Rep. Joe Neguse of Colorado’s statement:

Only Congress has the power to declare war. The President’s unilateral decision to launch this airstrike, yet again, comes without consultation or caution and signals the need for clarification of the Authorization of Military Force. That is precisely why I voted in support of a bipartisan amendment earlier this year that would have avoided a dangerous escalation with Iran by preventing federal funds from being used for any military force in or against Iran without congressional authorization.

Congress must reassert its constitutional obligations under Article I without further delay. And the Administration must consult Congress, as required by law, on both the airstrike and the next steps necessary to keep our country and service members safe.

That’s consistent with the concerns expressed by members of Congress in both parties in response to unilateral military actions taken by President Barack Obama such as the 2011 military intervention in Libya, including Rep. Diana DeGette of Denver who had “significant questions” about committing American forces in that country even after Obama went on national television to explain.

But if you were hoping from similar candor from Colorado’s highest-ranked Republican Sen. Cory Gardner, you’ll be disappointed by his statement in response to the killing of Qassem Soleimani:

I commend the Administration for taking this decisive action today in Baghdad against Tehran-backed terrorists. The world should not mourn Qassem Soleimani, a man whose name is synonymous with murder in the Middle East and who was responsible for the deaths of hundreds of American service members. I now urge the Administration to be prepared for possible retaliation, including against U.S. troops stationed in the region, and to consult closely with Congress on any next steps should the situation escalate. I hope Iran will realize its future depends on stopping its support of terrorism.

The question of course is not whether an avowed enemy of the United States like Soleimani should be “mourned,” but whether this action results in a wider conflict in the Middle East that could result in many more deaths, and plunge the nation into a full-scale war just as the 2020 election year gets underway. At this moment, there’s a lot we don’t know–what exactly prompted the decision to strike now instead of another time and place, the nature of the “additional attacks” it has been suggested were imminent had Soleimani not been killed, and whether the Trump administration has a plan for the aftermath of this action at all.

Three U.S. Presidents have been successfully impeached. Trump could become the first President who starts a war between his impeachment and the Senate trial. Politically this is all uncharted territory, which isn’t a new experience under Donald Trump. For the good of the country and the whole world, everyone should hope that this action was taken for legitimate and urgent national security reasons, and not to distract attention from Trump’s domestic political problems.

If the latter is true, the judgment of history will be very harsh.